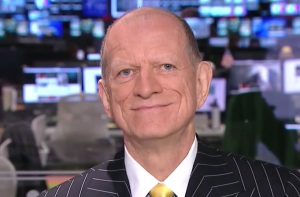 An economic and trade advisor to Donald Trump argued in a column earlier this year that President Barack Obama and Hillary Clinton were conspiring to carry out an ethnic genocide of America’s white blue-collar workers.

Curtis Ellis is the Executive Director of the American Jobs Alliance, a nonprofit opposed to the Trans-Pacific Partnership. In the run-up to Trump’s major economic speech in early August, Ellis began making appearances on CNN, MSNBC, and Fox News on behalf of the Trump campaign, billed in each segment as an advisor to Trump. MSNBC’s Joy Reid also reported that Ellis helped write Trump’s speech.

Ellis’ exact role in the Trump campaign is unclear; he was not on the list of nine economic advisors released earlier this month and Trump press secretary Hope Hicks ignored multiple requests for clarification of whether he advised Trump officially or unofficially. Ellis responded to Mediaite’s original request for comment by saying he would get back quickly with an answer. He did not, and failed to respond to a later request for clarification.

But if Ellis advised the Trump campaign even informally, his somewhat interesting views on trade policy ought to raise eyebrows. In a May column for World Net Daily titled “The Radical Left’s Ethnic Cleansing Of America,” Ellis argued that real driving force behind liberal economic policy was a desire to kill off lower class whites.

“Hillary Clinton and Barack Obama want us to believe that the disappearance of American jobs in ‘the new global economy’ is as inevitable as the sun rising in the east. Nothing could be further from the truth,” he argued. “In fact, the radical left planned the liquidation of white, blue-collar working families in order to ‘fundamentally transform’ America.”

Ellis makes it clear in the column he’s talking about the literal, premeditated death of white Americans [emphasis added]:

The party cadres set out to build their brave new world and eliminate their class enemies – read: white working people. It is in this context that we understand why Clinton and company push so-called “free trade” deals like NAFTA and Obamatrade, corporatist schemes that move America’s manufacturing assets – and jobs – to Mexico, China and elsewhere. If you believe, as do the leftists, that America has more than it deserves and Americans are racists, the global redistribution of our wealth and the death (literally) of white working people is a desired outcome, a feature not a bug.

“Race warriors, displaying group solidarity or guilt, were pleased to see the jobs of white Americans moving to the Third World…” Ellis concluded. “And so, dear readers, that is how the death of American working-class whites was planned by the radical left and carried out with willing executioners at the highest levels of American politics, academia and business.”

Ellis’ fear of white genocide earned him the supportive ear of Breitbart’s Steve Bannon, now the campaign CEO of the Trump campaign. In a SiriusXM interview with Ellis, Bannon called the WND column “stunning” and “so provocative.”

“I want everyone to read this article,” declared Bannon, before telling Ellis, “We’re going to have you start to come on more on a regular basis.”