Trump Believes Putin Over US Intelligence Agencies on Russian Meddling

Trump Believes Putin Over US Intelligence Agencies on Russian Meddling 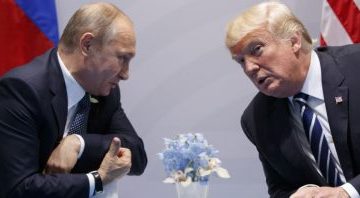 President Donald Trump told reporters on Air Force One that he believes it when Russian President Vladimir Putin tells him that Russia did not interfere with the 2016 General Election, which goes directly against the findings of many U.S. intelligence agencies

Trump’s apparent decision to believe Putin’s denial of Russian election meddling directly counters the findings of the CIA, at least according to his CIA Director Mike Pompeo, who has said “of course” Russia meddled in the election “and in the last one and the one before that.”   Director of National Intelligence Dan Coats  has said there is “no dissent” within the intelligence community on the question of whether the Russians interfered with the American election.”

During a flight aboard Air Force One from Da Nang to Hanoi, Trump told reporters “He said he didn’t meddle. He said he didn’t meddle. I asked him again. You can only ask so many times,” Trump reportedly spoke with Putin three times on the sidelines where the Russian interference issue ostensibly came up. President Trump claimed that he doesn’t want to press further because he thinks the U.S. and Russia can work together on issues that include North Korea, Syria, and Ukraine.

Not originally in the rush transcript put out by the WH Press Pool, CNN reported this specific exchange in which President Trump referred to former Intelligence officers as biased in their commentary.  From CNN: “I mean, give me a break, they are political hacks,” Trump said. “So you look at it, I mean, you have Brennan, you have Clapper and you have Comey. Comey is proven now to be a liar and he is proven now to be a leaker. So you look at that and you have President Putin very strongly, vehemently says he had nothing to do with them.”

Both leaders were in  Vietnam for a trade summit amid speculation of whether a meeting of the two will happen. The White House has claimed that no “formal meeting” is scheduled though they may “bump into” one another, while the Kremlin has announced plans for a meeting.

Read the full transcript of Trump’s conversation with the press on Air Force One below:

G: Did Russia’s attempts to meddle in US elections come up in the conversations?

A: “I just asked him again. He said he absolutely did not meddle in our election, he did not do what they are saying he did.”

Q: Do you believe him?

A: Well, look, I can’t stand there and argue with him, I would rather have him get out of Syria, to be honest with you. I would rather have, I would rather him— get to work with him on the Ukraine rather than standing and arguing about whether or not— because that whole thing was set up by the Democrats. I mean, they ought to Look at Podesta, they ought to look at all the things that they have done with the phony dossier. Those are the big events. Those are the big events. But Putin said he did not do what they said he did. And there are those that say, if he did do it, he wouldn’t have gotten caught, alright, which is a very interesting statement. But we have a good feeling toward getting things done. If we had a relationship with Russia, that would be a good thing. In fact, it would be a great thing, not a bad thing, because he could really help us on North Korea. We have a big problem with North Korea and China is helping us. And because of the lack of the relationship that we have with Russia, because of this artificial thing that’s happening with this Democratic-inspired thing. We could really be helped a lot, tremendously, with Russia having to do with North Korea. You know you are talking about millions and millions of lives. This isn’t baby stuff, this is the real deal. And if Russia helped us in addition to China, that problem would go away a lot faster.

Q: On election meddling, did you ask him the question?

A: Every time he sees me he says I didn’t do that and I really believe that when he tells me that, he means it. But he says I didn’t do that. I think he is very insulted by it, if you want to know the truth. Don’t forget. All he said was he never did that, he didn’t do that. I think he is very insulted by it, which is not a good thing for our country. Because again, again, if we had a relationship with Russia, North Korea, which is our single biggest problem right now—North Korea, it would be helped a lot. I think I’m doing very well with respect to China. They have cut off financing, they have cut off bank lines, they’ve cut off lots of oil and lots of other things, lots of trade and it’s having a big impact. But Russia, on the other hand, may be making up the difference. And if they are, that’s not a good thing. So having a relationship with Russia would be a great thing—not a good thing, it would be a great thing—especially as it relates to North Korea. And I’ll say this: Hillary had her stupid reset button that she spelled the word wrong, but she does not have what it takes to have that kind of relationship where you could call or you could do something and they would pull back from North Korea, or they would pull back from Syria, or maybe pull back from Ukraine. I mean, if we could solve the Ukraine problem. But this is really an artificial barrier that’s put in front of us for solving problems with Russia. He says that very strongly, he really seems to be insulted by it and he says he didn’t do it.

Q: Even if he didn’t bring it up one-one-one, do you believe him?

I think that he is very, very strong in the fact that he didn’t do it. And then you look and you look at what’s going on with Podesta, and you look at what’s going on with the server from the DNC and why didn’t the FBI take it? Why did they leave it? Why did a third party look at the server and not the FBI? You look at all of this stuff, and you says, what’s going on here? And the you hear it’s 17 agencies. Well, it’s three. And one is Brennan. And one is, whatever. I mean, give me a break. They’re political hacks. So you look at it, and then you have Brennan, you have Clapper and you have Comey. Comey’s proven now to be a liar and he’s proven to be a leaker. So you look at that. And you have President Putin very strongly, vehemently says he had nothing to do with that. Now, you are not going to get into an argument, you are going to start talking about Syria and the Ukraine.

Ed. Note — the transcript pasted above has been updated with a more accurate version sent from the Pool Report.