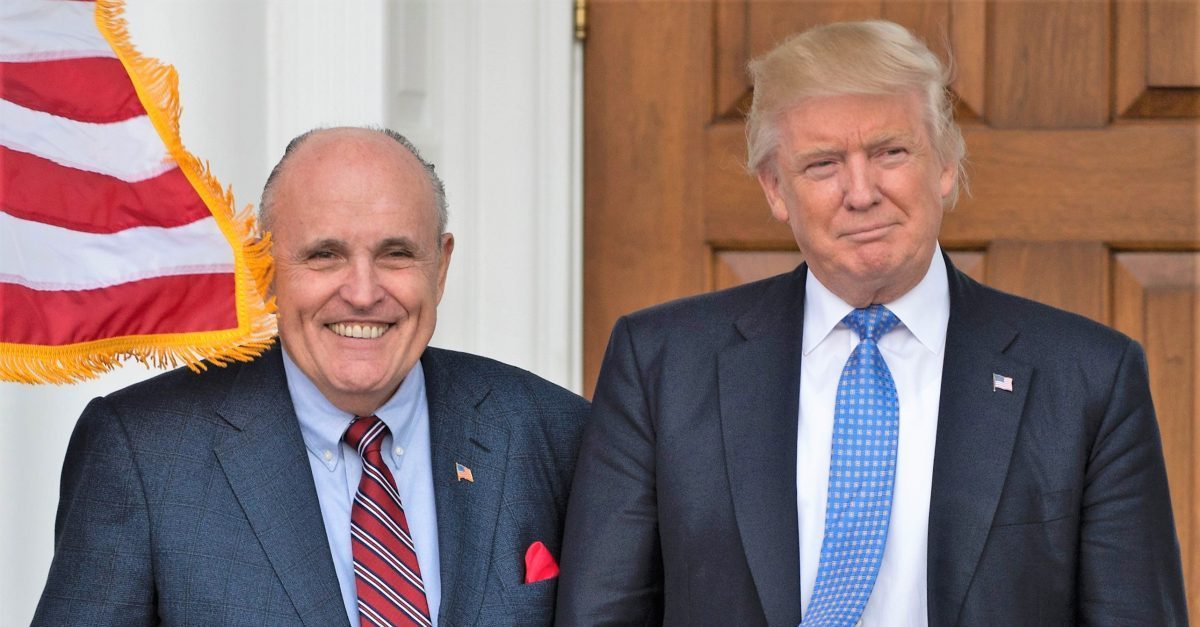 President Donald Trump created some distance between himself and his personal attorney Rudy Giuliani in an Oval Office interview he provided the New York Times published Thursday night. The wide-ranging interview covered many topics currently in the news: U.S. foreign policy, the current political stalemate over border security and even his potential political rivals vying for the Democratic presidential nomination.

He also spoke at length about the Trump Tower Moscow project which came to light during the legal proceedings of former Trump Organization lawyer Michael Cohen. During his run for the presidency and early in this current term in the White House, Trump denied any business dealings with Russia as a means to push back allegations that his campaign may have colluded with the country to help win the presidency.

As it turns out, he had signed a letter of intent to develop a Trump Tower in Moscow, which critics point to as evidence that he had not been truthful with the public, or much worse. But in Mr. Trump’s words “this was a very unimportant deal.” He then appeared to lay blame at the feet of his old friend Giuliani for mismanaging the information.

From the NY Times released transcript:

TRUMP: Rudy was incorrect. No. 1, he was incorrect, and we’ve explained that, he was wrong. Rudy has been wrong. A little bit. But what has happened is this. I didn’t care. That deal was not important. It was essentially a letter of intent or an option. I’m not even sure that they had a site. And if you look at where that was sent to, that was a Michael Cohen thing. If you look, I always say, Why don’t you bring this up, to Jay Sekulow, good guy. I think it was sent to almost like a public address for Moscow. If you take a look at it. Take a good solid look. The original letter or something was sent. They didn’t even have anybody to send it to. But that deal is just like other deals. I was doing other deals. I was running for president, but I was also running a business.

Reporter Peter Baker pushed back on Trump’s dismissal, reminding the commander in chief, “But you told people that you didn’t have any business there. People might have misunderstood.”

Baker pressed: “Isn’t that misleading to say you weren’t pursuing business there, right?”

I had no money invested. It was a letter of intent, or option. It was a free option. It was a nothing. And I wasn’t doing anything. I don’t consider that even business. And frankly, that wasn’t even on my radar. If you take a look at that, take a look at the deal. There was no money put up. There was no transfer. I don’t think they had a location. I’m not even sure if they had a location.

After clarifying further that it wasn’t as though he was going to “buy a property in Moscow” or “I’m building a building in Moscow” and saying it was a “free option to look at a deal.”

He then blamed his personal lawyer again saying “Rudy was wrong in that he went — I think what Rudy was looking at, I think, was that in the statement I made to the Mueller group, we talked about during that period of a year, up until the election, we talked about that. So he may have been referring to that.”

Giuliani had previously stated that Trump’s dealings with Russia over a Trump Tower Moscow deal had gone all the way up to his election in November of 2017 which he then walked back.

It’s been pointed out by many of Trump’s critics that Vladimir Putin knew more about Trump’s discussions with the Kremlin over his potential business opportunities than did the American public who were deciding two whom to vote in 2016. None of this is evidence of conspiracy or collusion of course, but the apparent lack of transparency at the very least raises some questions. Questions that will ideally be answered by Special Counsel Robert Mueller.