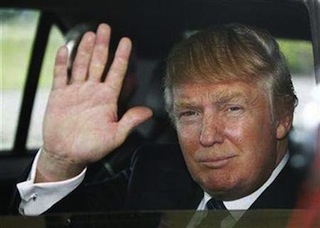 Donald Trump joined Rush Limbaugh via phone today and talked with him for 17 solid minutes. The conversation broached many subjects and, while it was a good interview, perhaps the most interesting note is what they didn’t talk about. Not once during the call did the subject of President Obama’s birth come up. Trump’s investigators in Hawaii must feel so insulted.

What does this mean? When Limbaugh asked Trump why he was doing so well in the polls (read more about that here), Trump replied that people were really responding to his “message.” However, ever since he began toying with the idea of running for President, so much of that message has been irreparably connected to stoking the embers of the Birther fire. While those polls show this has done well for him, just the mention of this question draws fury from large amounts of people Trump would need to actually win (see Glenn Beck for an example). While the topic has garnered him the huge amounts of media attention that someone needs for a national campaign, it’s not good enough when 90% of the country don’t know any position you have other than thinking the President may not be from here.

And, sure, those polls show the issues success, but maybe they also showed Trump and his team that it’s time to get serious. It looks like he actually has a real shot here with the Conservative base. He’s clearly accomplished that. However, he needs to discuss some real issues if he wants even a chance with the Independents. Was this the idea when he picked up the phone and called in today? Is this interview the best sign we’ve gotten that this is a real campaign here and not an attention ploy?

Anyway, what did he talk about?

Well, the interview started off as well as one can. Today marked Limbaugh’s annual Cure-a-thon to help find cures for leukemia, lymphoma and myeloma. Before anything else could be discussed, Trump promised to hand over $100,000 to the fundraiser. If you’re super rich, this is a pretty great way to begin a potentially challenging interview.

With that out of the way, Trump took shots at OPEC and the way we’ve been doing business with China (he claimed he knew people that were much “meaner” than anyone the Chinese had for negotiations). He said Paul Ryan and other Republicans should watch out and not get “too far out in front” on the budget because the instant they mention touching Medicare, the Democrats will “attack them unmercifully.” And, of course, he talked money. In addition to the generosity with the charity, Trump promised that, if he were to run, he’d file a financial statement that would “blow people away.”

Limbaugh asked him about his friendships with Democrats which Trump said he had to cultivate since he believed “nearly 100%” of New York City was Democrat.

“I’ve dealt with Democrats and Republicans all my life and somebody said, ‘Oh, do you have much experience politically?’ You know what? I’ve dealt, and you understand this better than anybody, I’ve dealt with politicians all of my life. I’ve also dealt with foreign countries. I’m doing jobs all over the world. I’ve dealt with foreign countries for long periods of time. The fact is, I think that somebody that got along with the Democrats, and I do get along- and you know that could change instantaneously, you understand that. You know, in the old days, across the aisle wasn’t the worst thing. People got along. Today, the level of hatred- and I’m the most militaristic guy there is if they treat me improperly, but I think having a bit of a relationship with the other side of the aisle isn’t a bad thing. Deals can be made.”

Now that sounds like a guy who’s trying to prove he’s serious and isn’t just going for the Far Right any more. That being said, and while there was nothing about Obama’s birth, that doesn’t mean the President got off easy. On the contrary, Trump said he thought Obama would possibly go down as the worst president in history.

So, is he really running? Is this just ways to promote himself and his show (Trump promised that on the Celebrity Apprentice finale, he’d announce his announcement. Yay.)? Only time will tell but, the less we hear about the birth certificate from this point forward, the better chances I gather that this is real.

Listen to the whole interview below: