Trump Gives Showing His Birth Certificate Another Try, Gets It Right This Time 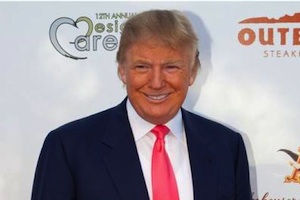 Recently, the second biggest prospective presidential candidate/reality show host in the country, Donald Trump, began his new persona as full-time Birther. In an attempt to make a big symbolic gesture, he then presented his birth certificate to the conservative website Newsmax. Well, symbolic it was, as Trump made a mistake much funnier than anything in his Comedy Central roast by handing in the wrong document. Basically, it’s as if George Bush’s staff had mistakenly hung up a “Happy Birthday, Saddam!” banner instead of “Mission Accomplished.” Well, Trump gave it a second try and, this time, he handed in the right document. Hooray!

A Trump staffer helpfully explained the difference to the two documents to ABC News:

Good to know. For those of you who really want to know fun birth certificate facts like how long Trump’s mom stayed at the hospital before he was born, you can check out the full thing here. For the rest of us, we can just settle down and hope that the rest of this election process can remain this entertaining.