Trump Says Everyone Should Say ‘Merry Christmas,’ Forgets His Own ‘Happy Holidays’ History

Guess how long it took for people to discover some hypocrisy on Trump’s part.

Now, back in 2012 Trump tweeted about this subject too:

@shanesgranny Thanks and Happy Holidays.

He also shared what others tweeted at him without correcting them:

"@jimmycapo65: @realDonaldTrump I would work ur campaign and u wouldn't even have to pay me, Happy Holidays!"

"@BernardCastro3: @realDonaldTrump Wishing you Happy Holidays. Can't wait for the #CelebrityApprentice to start in January." 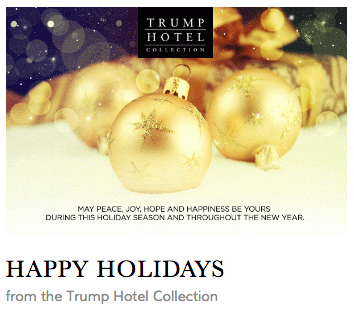 There’s also this 2010 holiday message from Trump International Hotel & Tower general manager Suzie Mills, in which the word “holiday” is typed and spoken but not the word “Christmas.”

I mean, I suppose we could just not care whether someone says “Happy Holidays” or “Merry Christmas” if they mean either with polite and/or sincere wishes, but that would mean putting aside our differences and coming together in unity, which is clearly not what the Christmas season is all about.