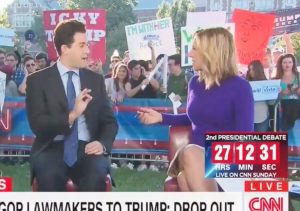 Andy Dean will always be counted on to back up Donald Trump, no matter what. We learned that when he stood defiant in the face of laughing panelists on CNN and insisted that the GOP nominee looks “fantastic.” After that, no defense from Dean should be surprising, even today’s, which saw him trying to brush off the scandal caused by leaked audio of Trump saying truly crude things about women in 2005.

Poppy Harlow stopped him as he attempted to smear Hillary Clinton for the Clinton Foundation’s receipt of donations from Saudi Arabia, asking him point-blank if he was really trying to draw an equivalency there to somehow claim that Trump’s words against women are on the same level as accepting donations from a country that is not particularly feminist.

“If I ran a news network, you could have breaking news and fancy news that can say, ‘Hey the Clinton foundation is up to this,’ but I don’t; CNN runs the network, and so there’s breaking news –”

Harlow interrupted him, telling him she had no interest in going down that “rabbit hole” when he knew that CNN has covered the Clinton Foundation extensively. Dean tried a new tactic, saying that the audio leak is 11 years old, which caused Harlow to tell him dryly that Trump was 59 in 2005, meaning he wasn’t exactly young and impressionable.

He got exasperated and started hammering the media for calling on Trump to drop out and claiming his followers are “troglodyte cave-dwellers.” When Harlow demanded to know who has been saying that, he told her that CNN has been insinuating it. Earlier in the day, CNN’s Mark Preston did compare Trump to a Central American dictator in denial that he was facing his final days in his position and Jim Acosta shared his opinion that “this could be it” for Trump.

Harlow had been in the process of telling Dean that a shocking amount of the GOP has called for Trump to step down today.

Watch the whole argument above.