Tweet Feat: Social Media Is Turning Us Into a Nation of Angry Cowards 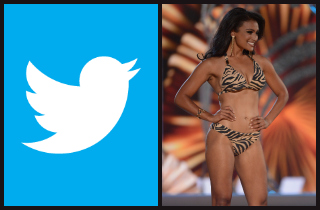 Many of you are cowards.

Many of you loathe old-school confrontation.

Many of you have strong opinions on everything from one’s appearance to their values set.

Many of you like to share your perspective. Not face-to-face, mind you…that’s just so 20th Century. Instead, judgment is made anonymously from behind a keyboard, a pad and smartphone from a couch, desk, bed, latrine or even from behind the wheel (because, you know, waiting until being stationary would mean acting like an adult).

The crowning of Miss America is usually a ho-hum occasion. It gets some play on the morning shows and the winner usually makes the media rounds for a day, but the attention fades in about 24 hours. 2013 was obviously the exception, however, as Nina Davuluri became the first Indian-American to capture the crown.

But the big story wasn’t her victory, but the immediate, repulsive, racist reaction afterward on Twitter.

“So Miss America is a terrorist,” one ignoramus wrote, because everyone knows India was behind 9/11, Benghazi and the shoe and underwear bombers.

It would be nice to attach an actual name to these kinds of Tweets, and there were thousands to choose from, but that’s the so-called beauty of social media: You can be anyone you want to be. Hide behind any handle. Say anything you wish. All without repercussions…

The same occurs in the comments section of every political, sports and gossip site on the web. It’s almost all about anger, sarcasm, condescension, insults, racism, sexism…just insert your “ism” here.

It’s really the same attitude we see on America’s highways today: Just yesterday on the Garden State Parkway, a guy suddenly comes up behind me in his Mercedes doing what had to be 95 miles per hour. To my right is a truck, thereby precluding me from freeing up the lane. The idiot proceeds to flashes his high beams, honk…then rides up to about one foot of my bumper. Note: I have precious cargo in the car (my dog Chase, who very well could have been my future daughter arriving next month), but this idiot simply doesn’t care. It’s 2:00 PM on a Saturday afternoon, and he really, really has to get wherever he’s going in record time.

After about 30 seconds, the truck in the other lane finally clears and I move to the right as we approach a bridge. He drives by, slows up for a second, predictably flips me the bird, and speeds off again.

I tried to imagine this same scenario as I was walking down a busy sidewalk in Hoboken later in the day. So let’s say I was strolling along at a normal pace, but the same guy from the Mercedes is behind me and moving at Tom Cruise speed (as my favorite writer Bill Simmons enjoys pointing out, Cruise runs breathlessly at full speed in nearly every movie he’s in). Meanwhile, a family of five that stretches across the rest of the sidewalk is directly next to me, so similar to the situation on the Parkway, I can’t move out of the way of Mercedes/Cruise until the family gets out of the way.

Now…would the Mercedes/Cruise guy have the stones to blow by me and extend the bird to my face without car doors and two tons of steel to protect himself? Would he say something, do something, to express his candid opinion of my walking style?

Because that would entail consequences via a possible confrontation (verbal, physical, whatever)…

Same goes for Twitter and any comments section on the web. Would any of these brave souls say what they did about an Indian-American Miss America, The President of the United States, Tim Tebow or Ted Cruz if forced to make the kind of remarks we’ve being seeing to their respective faces?

But the days of anonymous commenters is coming to an end at some major publications, including the Huffington Post.

“Trolls are just getting more and more aggressive and uglier, and I just came from London, where there are threats of rape and death threats,” Huffington Post founder Arianna Huffington said at a recent conference in August. Consequently, the popular site says it will end all anonymity in the comments section later this month: “I feel that freedom of expression is given to people who stand up for what they say and not hiding behind anonymity,” says Huffington. Other sites are now only offering registering to comment via Facebook, which would also cut down significantly the ability to post anonymously.

But does it go even deeper than just taking cheap shots from the cheap seats? According to the National Institute of Mental Health, slightly more than one in four Americans (26 percent) 18 years and older suffer from a diagnosable mental disorder in any given year. Having said that, here’s what Royce White, an NBA player with the Philadelphia 76ers and unofficial spokesman for mental illness in the league—said earlier this year about the possible connection between social media and mental illness.

Courtesy of Chuck Klosterman of Grantland:

“As much as we want to think that these are just people behind computer screens, those people are living next door to you. They are people behind computer screens in schools. In hospitals. Working in Washington, D.C. These are real people. How many times does this stuff have to happen before we admit something really disturbing is going on here? I think one person tweeting “F**k you, go kill yourself” is disturbing. But when you get into the hundreds of those tweets? The thousands of those tweets? I see a lot of people out there with really volatile mental disorders that are not getting help. Because I go to their own Twitter pages, and I can see they’re not just sending those messages to me. They’re sending them to a bunch of people.”

“Why has hate become the national pastime?” asked Bill Maher on his show Friday night. A hilarious question when considering the source. This is the same guy who called Sarah Palin a word that rhymes with bunt and her special needs child a retard. Hate pays Maher’s paycheck on a weekly basis, but give him this: He is brave enough (for lack of a better word) to say it without a shroud of secrecy to protect him.

In the end, we’re mostly a nation of complainers.

There are exceptions, of course.

No scientific study to come to this conclusion is needed…just study your Twitter feed or read the average comments section on the web.

We whine, we criticize, we insult, we patronize because it makes us feel better about ourselves for a minute or two.

Maybe it’s because of a mental disorder.

Or maybe, just maybe…it’s just because we need to step away from all means of communication some more.

And get back to being human beings who actually interact with each other. So the next time you’re out to dinner, do this: Have everyone put their phones in the middle of the table. The first who reaches for theirs pays for dinner. Works every time…

It’s making angry cowards out of many of us.