Tweets On A Plane! The Very Best From My Tweetdeck, Perused from 30,000 Feet

Tweets On A Plane! The Very Best From My Tweetdeck, Perused from 30,000 Feet 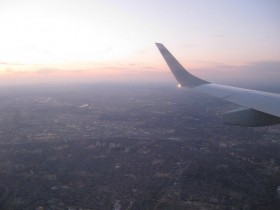 Here’s a trick, for those of you flying on those quaint old-fashioned airlines that still don’t have wifi: Make sure your Tweetdeck is locked and loaded with all sorts of juice before you get on a plane, and then spend the next hour or so catching up with the 140-character brilliance of those you follow. That’s what I did this morning as I flew back home from Toronto (and boy are my arms tired! Wa-wa) – and as I found myself making mental notes to retweet a few when on the ground, I thought, why not a group retweet? Otherwise known as randomly collected and curated series of tweets that’ll do nicely for a blog post, thanks. You’ll never get at all the good stuff in your (or my!) Twitter feed, but at least I can give these gems a second chance. What is John Carney‘s brilliant idea to save journalism? Where can you ogle a young Johnny Depp? What TV does Jenny 8. Lee recommend? Why do Ford Models think Bill Clinton is Bubba-licious? How can you learn more about the NASA’s new ION space engine? The answer to those questions and many you didn’t know you had lie below, in this first installment of The Best Of My Tweetdeck, which just became a recurring feature. You’re welcome.

@NYT_JenPreston: Fascinating look at Harvard’s efforts to map news and info on the Web http://bit.ly/KVuZm

@Carney: My newest idea on how to save print: publish on edible paper, so you can buy lunch and the newspaper at the same time. “News You Can Chew.”

@MarkEvans: Strange, I’ve noticed several people within my Twitter stream recently who I definitely know I haven’t followed. How’d they sneak in?

@Jenny8Lee: if you missed the frost nixon interviews on nyc’s PBS last night, they are on again 8/10 at 8 pm: http://bit.ly/1hsLp1

@Yelvington: The Clinton picture w/ Kim is fascinating in its omission of any other Koreans. Avoids analysis of pecking order.

@niche: Season 1 of ’21 Jump Street’ is now on Hulu.com  Gotta watch it to see a very young Johnny Depp.

@FordModels: I like it when a man takes matters into his own hands: Clinton gets the girls http://bit.ly/9SRMl GG

@TodayShow: Secretary of State Hillary Clinton speaks out about the release of Laura Ling and Euna Lee. Video: http://tr.im/vyI3

@TheStalwart: Actual dream last night: I wrote a Tweet with the word ‘webinar’ in it, and instantly got 5 new marketing people following me.

@Jason_Pontin: NASA’s new ION space engine, which might be ready for launch by 2013: http://www.technologyreview.com/computing/23120/