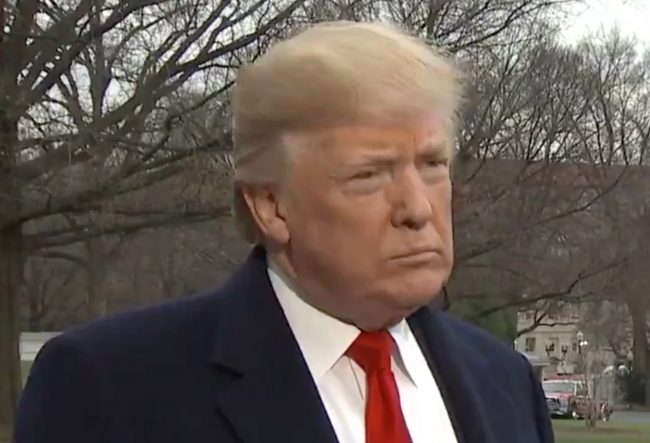 With much of America mired in a deep freeze, President Donald Trump decided to dig into his greatest hits vault and tweet out some climate change skepticism. While it was no “global warming was created by and for the Chinese in order to make U.S. manufacturing non-competitive,” his latest remarks still fit squarely in line with his past dismissals of climate change.

In the East, it could be the COLDEST New Year’s Eve on record. Perhaps we could use a little bit of that good old Global Warming that our Country, but not other countries, was going to pay TRILLIONS OF DOLLARS to protect against. Bundle up!

Considering that the leader of the free world still doesn’t seem to grasp the difference between weather and climate, this tweet was tailor-made for internet mockery. And, as always, Twitter came through with flying colors.

It’s funny – when Trump made his Paris Accord announcement, the White House evaded for days as reporters asked whether the president still believes global warming is fake.

like, remember how for months his aides would not answer if Trump still thinks global warming is fake? https://t.co/4wqgPaW9mC

These two tweets are referring to the White House avoiding questions about the president’s views on man-made climate change, especially after Trump pulled the United States out of the Paris Climate Accord.

Imagine being so ignorant that you don’t understand why a single cold snap doesn’t disprove climate science based on centuries of data https://t.co/KuPIrgwaIf

the buoy that commemorates the spot where Mar-a-Lago used to be should be emblazoned with this tweet https://t.co/PaQsYikKiQ

The original application for the wall cited global warming and rising seas as a reason for needing the wall https://t.co/C4RQDM1z5Q https://t.co/pI8SEZzmdC

When the alien archaeologists study the ruins of human civilization, this will take a prominent place in their notebooks https://t.co/6eutLWiVcn

Does this mean global warming isn't a Chinese conspiracy? https://t.co/rbwet0w6RE

A play in two acts pic.twitter.com/uLG21dJBGE

Thanks to Twitter I know that when it gets cold outside, @realDonaldTrump will wonder where global warming went pic.twitter.com/9WpWleUiOK

Dear lord. For the record, global climate change creates more extreme weather on both ends of the spectrum. #Science. https://t.co/i3ift6dTHQ

The president is still the world’s leading proponent of the world’s stupidest talking point about climate change. pic.twitter.com/N8ThtBABc6

It’s super normal to have a president who doesn’t understand the difference between climate and weather https://t.co/TOUoPQTqr5

This is simply among the stupidest ramblings ever tweeted – especially from the leader of the free world and a nation that ONCE led the world in science. You condemn us with your contrived ignorance and outlandish arrogance. Happy New Year. https://t.co/x0H1mBl8X3