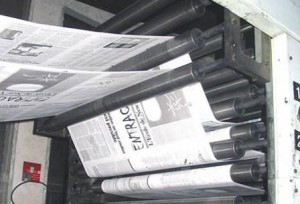 As if right-wing conspiracy theorists, convinced that The Washington Post‘s expose´ of Mitt Romney‘s prep school/involuntary barber school years is the result of some nefarious collusion, needed any encouragement, The Huffington Post‘s Mike Calderone reports that WaPo held the print version* of their story in order to avoid placing it next to news of President Obama‘s recently completed “evolution” on gay marriage, and all that it would imply.

*Some news outlets print their websites onto paper, and sell them to old people and hotel guests.

It’s no surprise that someone like Sean Hannity or Eric Bolling would subscribe to some strange conspiracy theory (Bolling told Hannity last night that one of WaPo’s named sources “worked for” then-Senator Obama’s 2008 campaign, not mentioning that he was a volunteer, and that the WaPo article disclosed that fact), but it is a bit surprising that the Bully Truthers count Mitt Romney among their number.

They should all have a good bit of fun with this revelation, from HuffPo‘s Mike Calderone:

Post print subscribers — greeted Thursday by a two-column headline touting President Barack Obama’s newly stated support for marriage equality, “Historic step by Obama on gay marriage” — wouldn’t find the 5,500-word piece in the paper, even though it was ready to go. Post editors were concerned about placing the Romney story on the front page alongside pieces about Obama voicing his support for same-sex marriage, a lead story joined on A1 by a news analysis piece, a reaction story and a tease to the Post‘s editorial praising Obama for his “statement that is both symbolically important, enormously cheering.”

“We’re mindful of the news going on this week, particularly yesterday,” Post political editor Steven Ginsberg told The Huffington Post. “We thought it was better not to have it in today’s paper.”

“The stories aren’t really about the same thing,” Ginsberg added, “but the perception among some might have been that putting them together would have created an impression we didn’t want to create.”

Aw, come on, who would ever draw a conclusion like that?

Aside from the Romney campaign’s poor handling of this episode, the way other news outlets have chased this story has emerged as a fascinating storyline. While right-wing reaction has been predictable and, at times, hilarious, Slate‘s Dave Weigel notes that some mainstream outlets are not faring all that much better:

The follow-ups to Jason Horowitz’s original Romney hazing story have run the gamut, all the way from strange to confounding. Key exhibit: Matthew Jaffe’s pulse-quickener with the headline “Sister of Alleged Romney Target Has ‘No Knowledge’ of Any Bullying Incident.”

That’s Jaffe’s lede, too, and he adds Christine Lauber’s quote: “Even if it did happen, John probably wouldn’t have said anything.”

Right-wingers like Michelle Malkin‘s Twitchy.com staffers take this to be yet another nail in the Bullygate coffin, but as Weigel explains, there’s no news there. The writer of the WaPo piece said he talked to Lauber’s sisters, and reported that Lauber never told them about the incident.

Weigel also points out that the ABC piece contains a correction of something that never appeared in Horowitz’s story to begin with:

Not only that, the WaPo story contained an extended passage describing how other students used Lauber’s room as an escape hatch to the outside world.

Before it’s too  late, I would like to state, for the record, that I did not witness the incident, and never attended Cranbrook.