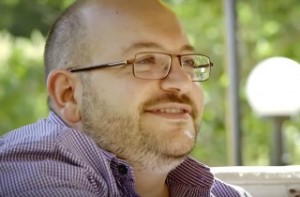 You may remember that back in January, Washington Post reporter Jason Rezaian was among the four American hostages freed by the Iranian government, Well, now Rezaian and his family have filed a lawsuit against Iran over his “severe personal injuries.”

The Post reports today that Rezaian is seeking damages from Iran over the psychological torture he was subject to during his imprisonment. Generally the Foreign Sovereign Immunities Act keeps U.S. citizens from filing lawsuits against foreign nations (hence that legislation Congress overrode Obama’s veto on to let 9/11 families sue Saudi Arabia), but there is a “terrorism exception.”

And in the lawsuit, we actually learn some details about what Rezaian underwent:

Iranian officials repeatedly told Rezaian and his wife, Yeganeh Salehi, who also was detained for more than two months, that Rezaian had “value” as a bargaining chip for a prisoner swap, the suit says. The filing also links key moments in the nuclear negotiations to Rezaian’s treatment in the judicial system, from arrest to conviction to sentencing, and ultimately his release on the day the deal was implemented.

“For nearly eighteen months, Iran held and terrorized Jason for the purpose of gaining negotiating leverage and ultimately exchanging him with the United States for something of value to Iran,” the suit states.

And as WaPo reports, they were interrogated in isolation, sleep-deprived, and “their captors at turns threatened to dismember or execute them.”

Rezaian and his family are still dealing with the trauma of his imprisonment months later, and WaPo executive editor Martin Baron supports what they’re doing:

“This legal filing is a stark telling of Iran’s brutal and heartless treatment of an innocent journalist and his wife, and the impact on those who love him. While this legal action is being taken solely by Jason and his family, The Post continues to support the Rezaians through their long and painful recovery.’’