Wasn’t Everyone Supposed to ‘Tone Down The Rhetoric’ After The Scalise Shooting?
Opinion

Wasn’t Everyone Supposed to ‘Tone Down The Rhetoric’ After The Scalise Shooting? 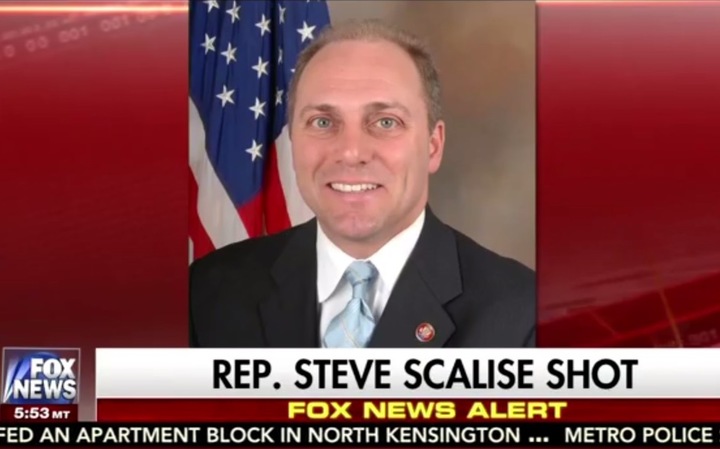 The Trump presidency has redefined the 24-hour news cycle. Between the investigations, the leaks, the tweets, and numerous other controversies, it seems like President Trump has generated more news in six months than President Obama has in eight years.

And because of that, things that happened so recently have become a distant memory. For example, last week’s assassination attempt of Rep. Steve Scalise and other Republican lawmakers.

Yes, that was last week.

In the wake of the shooting, there was a call for unity and a call for self-reflection. Speaker Paul Ryan (R-WI) and House Minority Leader Nancy Pelosi (D-CA) put their differences aside and sat down for joint interview at the congressional baseball game calling on both parties to “tone down the rhetoric.” CBS’s Scott Pelley and NBC’s Chuck Todd have acknowledged that the media had played a role in current political climate. In President Trump’s address immediately after the shooting, he stated that “we are strongest when we are unified.”

Sadly, Sean Hannity was right when he called this “kumbaya moment” an “outright illusion.”

It didn’t take long for everyone to go back to the same old song and dance of political division and over-the-top rhetoric that led us to the shooting.

Just look at how Democrats reacted to the Senate GOP’s health care bill that was released Thursday. Sen. Elizabeth Warren (D-MA) was shouting from the Senate floor about how “people will die” and that Republicans were relying on “blood money” for tax cuts. Sen. Chris Murphy (D-CT) went on MSNBC to say that the bill was “more evil” than the House bill. Senate Minority Leader Chuck Schumer (D-NY) called it “heartless.”

It’s one thing to have problems with the GOP’s health care bill (and there are plenty of problems with it), but to call it “evil,” “heartless,” and to fear-monger that “people will die” does nothing advance the conversation in a positive direction nor does it do anything to ease tensions that are already high among Americans. And Republicans were guilty of the same thing when Obamacare was being crafted. Those “death panels” they predicted were going to happen didn’t happen.

And speaking of Republicans, several haven’t toned down their rhetoric in the wake of the shooting either. Rep. Steve King (R-IA) said President Obama was partly responsible for the attack. Former Congressman Joe Walsh tweeted to his followers to literally “grab your muskets.” And a conservative group put out an ad tying Democratic candidate Jon Ossoff to the attack just days before the special election in the 6th District of Georgia.

The civil discourse by our politicians has been decaying for years now, but so has the quality of journalism.

You don’t have to look very far to find outrageous rhetoric being used by self-proclaimed “objective” journalists. Just look at what has been said since the shooting. MSNBC’s political analyst Elise Jordan compared defending President Trump to “hugging a suicide bomber.” CNN’s Senior White House Correspondent Jim Acosta claimed that Trump was “ushering a return to the Cold War” with Cuba because the president was reversing Obama’s policies. The New York Times tried to connect Rep. Scalise’s assassination attempt to Gabby Giffords by pushing the debunked narrative that hers was politically motivated (which it wasn’t, something that was settled six years ago).

It’s a shame that the words of Scott Pelley and Chuck Todd have fallen on deaf ears. Time and time again, the media keeps relying on hyperbole and political fantasies to push their own narratives instead of simply telling Americans the facts.

And then there’s President Trump.

He of all people should be doing what he can to unite the country. Like he said right after the shooting, “we are strongest when we are unified and when we work together for the common good.” Mocking Democrats constantly on Twitter isn’t doing that.

Granted, it’s tough to unite people that don’t want to unite with him. The Congressional Black Caucus refuses to meet with the president. Some are already calling for his impeachment. But President Trump must overcome these obstacles. He can set the tone for the rest of the country to follow. However, his tweets, his staff, and his agenda are all in such disarray that his goal to “make America great again” is becoming more and more difficult to accomplish.

Whether you’re an elected official, a member of the media, or a private citizen, take a moment to think about what you contribute to society. Do you spread positivity or animosity? Do you respect those whose thoughts and opinions differ from your own? Do you allow logic and reason to guide your judgment or knee-jerk reactions?  These are the types of questions we as Americans need to ask ourselves and make the changes that our society needs to make because if we don’t, America’s worst days will have yet to come.