WATCH: Marine Sings A Beautiful Christmas Song He Wrote For His Wife Back Home 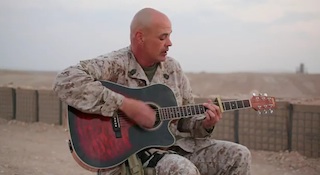 During a recent holiday season, Master Sgt. Robert Allen was stationed in Iraq, far away from his wife back home. So, he wrote a song about how much he missed her and sent it to her on Christmas Eve. According to Allen, his wife Carla “balled her eyes out when she heard it.” This year, the marine’s overseas again, this time in Afghanistan. So, he’s recorded a video of the tune, “A Marine’s Christmas Song,” and posted it to YouTube where it can be seen by many people who can relate to its simple, heartbreaking lyrics.

We can only imagine that a number of other people will react to the song the same way Allen’s wife did.

Allen from his station with the Marine Wing Support Squadron 371 at Camp Leatherneck, gave an interview with DVIDS, telling the song’s story:

‘I started writing my own music right away because I didn’t know anyone else’s music. I didn’t have anyone to teach me how to play, except an old music book,’ Allen said. ‘When I was a young Marine and didn’t have money for gifts, I used to write my wife songs for anniversaries.’

‘The Marines don’t need anything to help remind them of what they miss from back home,’ Allen said. ‘For the spouses, they should know we’re constantly thinking about them. ‘”