We Can Only Hope: Michael Moore’s ‘Final Thoughts’ On Osama Bin Laden Killing 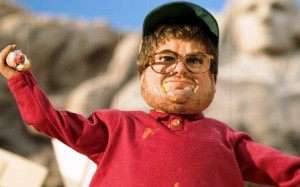 Right near the end of the second week  of Osama bin Laden‘s fish-feeding tour, rabble-rousing liberal filmmaker Michael Moore has issued what he calls “Some Final Thoughts on the Death of Osama bin Laden,” which is doubly good news, for me. Not only do I get to look forward to Moore finally shutting the f**k up about this, but because I missed his first several eruptions, it also affords me the opportunity to serve up a Super Big Gulp of STFU, ice cold, on tap.

In case you missed it, Moore’s initial reaction to the slaying of bin Laden was to pen an instant My Chemical Romance hit by saying “We’ve lost something of our soul here in this country,” because our SEAL team didn’t roll the dice that bin Laden didn’t have several blocks of C-4 stuffed in that TV he stole from the guard shack of his compound.

His lament, ironically, was that bin Laden hadn’t been captured so that he could receive that most American expression of justice, a fair trial. It’s ironic because, in the same breath, he denied that SEAL team the presumption of innocence that’s at the heart of our justice system, accusing them of performing “an execution.”

Moore’s final thoughts offer more of the same, but padded out with copious amounts of Dick Service™. Dick Service is like lip service, except you use it to paper over the dickish things you want to say later in your piece. For example, Moore lauds the SEALs he just accused of “executing” bin Laden thusly:

Here’s my take: I know a number of Navy SEALs. In fact (and this is something I don’t like to talk about publicly, for all the obvious reasons), I hire only ex-SEALs and ex-Special Forces guys to handle my own security (I’ll let you pause a moment to appreciate that irony). These SEALs are trained to follow orders. I don’t know what their orders were that night in Abbottabad, but it certainly looks like a job (and this is backed up in a piece in the Atlantic) where they were told to not bring bin Laden back alive. The SEALs are pros at what they do and they instantly took out every adult male (every potential threat) within a few minutes – but they also took care to not harm a single one of the nine children who were present. Pretty amazing.

That is pretty amazing, as is the fact that Moore can’t think of another way to describe killing someone who likely could not have been taken alive safely an “execution.”

He does take this opportunity to walk back, without apologizing, that “execution” claim (which he made repeatedly, with utter certainty) a teensy-tiny bit: (emphasis mine)

Perhaps there was no way to bring him back alive – I sure as hell wouldn’t want to be in that dark house trying to make that snap decision. But if the execution was ordered in advance, then I say we should be told that now, and we can like it or not like it.

Well, Mike, “if” you have to say “if,” then you shouldn’t be going around saying “he was executed.”

Michigan native Moore, though, uses the goodwill he thinks he has banked to tell New Yorkers how wrong their reaction to bin Laden’s killing was:

But before leaving to go to the former World Trade Center site, I turned on the TV, and what I saw down at Ground Zero was not quiet relief and gratification that the culprit had been caught. Rather, I witnessed a frat boy-style party going on, complete with the shaking and spraying of champagne bottles over the crowd. I can completely understand people wanting to celebrate – like I said, I, too, was happy – but something didn’t feel right. It’s one thing to be happy that a criminal has been captured and dealt with. It’s another thing to throw a kegger celebrating his death at the site where the remains of his victims are still occasionally found. Is that who we are? Is that what Jesus would do? Is that what Jefferson would do? I was reminded of the tale told to me as a kid, of God’s angels singing with glee as the Red Sea came crashing back down on the Egyptians chasing the Israelites, drowning all of them. God rebuked them, saying, “The work of My hands is drowning in that sea – and you want to friggin’ sing?” (or something like that).

There are a lot of things that Michael Moore is qualified to speak about, and while 9/11 was a tragedy that struck the entire nation, no one who wasn’t there has a right to judge those who were, who choked on the smoke and the tears as they watched that horror unfold, unsure what would happen next, or who still have to look at that hole in the sky where so much of our American soul once stood. If they wanted to sing “Waltzing Matilda” and do the wave, Michael Moore has nothing the f**k to say about it.

The rest of it is more tone-deaf bullshit, like trying to compare the bin Laden killing to V-J Day, as if there will ever be anything this close to a V-T Day for the American people to rally around, to steady, if only slightly, the ground beneath our feet that was yanked away that day.

Moore sums it all up with emo swagger:

A killer of 4,000 (counting the African embassies and USS Cole bombings) got double-tapped in his pajamas. Assuming it was possible to take him alive, I think his victims, the future, and the restoration of the American Way deserved better. That’s all I’m saying.

He’s right about one thing, we did deserve better. Like Moore, I would have loved to have seen bin Laden  stand trial in the United States, and after the “guilty” verdict, waited for him to get shanked in the shower before having my “kegger.” Maybe that makes me a bad guy, and a bad liberal, but I’m not going to judge any American for wishing an even more monstrous fate on him, or for celebrating the paltry amount of long-delayed just we did manage to get.