What the Hell Happened to the ‘Great’ Mark Levin?
Opinion

What the Hell Happened to the ‘Great’ Mark Levin? 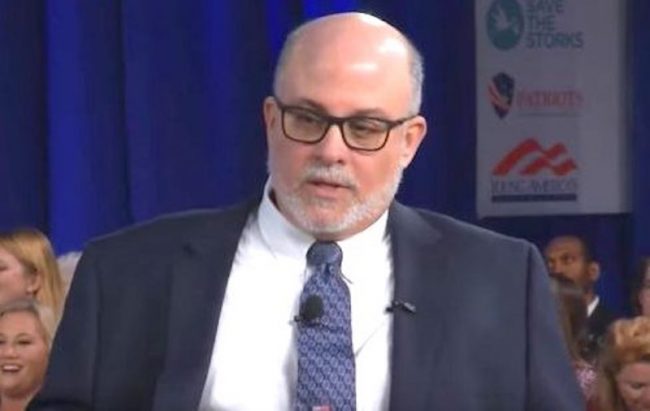 I’m not proud of it, but I have spent much of my career in talk radio. Consequently, I know, first-hand, that the vast majority of hosts are frauds. There are very few that I ever really respected. Two of those were Rush Limbaugh and Mark Levin.

Limbaugh lost his fire and became out of touch many years ago, but — if only out of loyalty and awe at what he had accomplished — I still considered him to be for “real.” That ended when he sat back and laughed while Donald Trump pulled off a hostile takeover of the Republican Party and killed conservatism in the process.

Now that Rush has become a full-blown Trump apologist, I see him as a sad joke. I question whether he was always like this and I never fully caught on, or if, like a post-scandal Tiger Woods, he simply felt forced to sell out in order to keep up the perception of his relevance.

If there was one national host who I was most sure to be rock solid in his principles and who would stand up for what he believes in, regardless of outside pressures, it was Mark Levin. Nicknamed “The Great One” for his remarkable intellect, Levin’s belief system seemed unbreakable.

And then came Donald Trump.

Levin has, almost as much as Joe Scarborough, been all over the map since the start of Trump’s presidential bid. It has been obvious that he has been desperately trying to find a credible position in which he would not expose himself as a hypocrite, but while also allowing his show to remain economically viable (and not piss of his pro-Trump buddies in the business).

At first, he was shockingly soft on Trump, seemingly enjoying the exciting content/ratings that Trump provided in the slow summer months of 2015. This was particularly jarring for Levin fans with decent memories, because Levin trashed Trump “bigly” back in 2011 on his radio show and on Facebook. 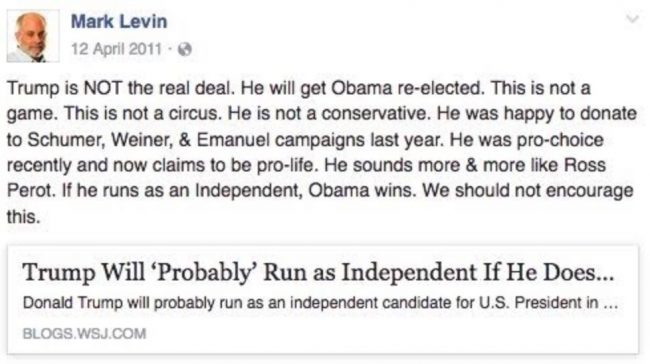 Then, once it became clear that Trump had a real shot at the GOP nomination, Levin started to become more critical of him, but by then it was way too late. He had helped the Trump rocket ship get safely off the ground without having to take much conservative fire and there was no stopping him at that point. He and I had a frank conversation about this at the Talkers Magazine conference in May of last year, which I wrote about here.

After holding out for a while, Levin eventually, reluctantly, decided to leave the “Never Trump” faction and support him in the general election. I didn’t agree with his decision, but at least, given that Hillary Clinton was the opposition, it was defensible.

What has not been defensible, in my view, is that Levin has now, seemingly having been bitten by a rabid canine carrying the “Trumpsanity” virus, has turned into a full-on attack dog on behalf of Trump, even when he is dead wrong. While this has been evident for a while, it has become major national news in the last few days as it appears a commentary by Levin was the genesis for Trump claiming that then-President Obama had Trump Tower wiretapped during the election.

One of the strangest elements of this episode is that Trump claimed something VERY different from what even Levin was theorizing about. And yet, after the story exploded, Levin has gone out of this way to create the grossly inaccurate impression that Trump is correct in his preposterous accusation, all while making a completely different case, one which, if true, is actually horrible for Trump in the big picture.

What Levin is doing, in an obvious effort to help his King save face, is actually quite comical. He’s using a handful of anonymously sourced articles (which Trump supposedly hates) from publications he would never otherwise trust (part of Trump’s “fake news” crowd) to make an argument that there might have been a perfectly legal/legitimate effort to put some people in the Trump campaign under surveillance due to ties to Russia.

So, to summarize, other than the stories being completely unconfirmed, Trump and Obama not being involved, Trump Tower not being targeted, wiretapping perhaps not even being used, and none of it seemingly being done illegally, Levin is trying to claim that Trump’s tweets, based in large part on his original commentary, totally hit the bullseye. The Mark Levin I know would have had a field day if someone from the other ‘team’ ever tried to pull that kind of stunt, but the days of intellectual consistency in the ‘conservative’ media are long gone.

Levin simply had no economic/career incentive to contradict his King, so he made the tactically smart move of acting like he was vociferously defending the Monarchy (just as state-run media is supposed to do) while actually making a completely different argument. This is as nonsensical as if a murder suspect’s defense team decided to stridently claim he was innocent because the police might have been rightly concerned that some of his friends may be involved in a separate crime.

So what’s really going on here? It’s sadly rather simple.

Levin’s best friends/allies in this game, Limbaugh, Sean Hannity, Ann Coulter, and Matt Drudge are now all card-carrying members of the state-run media. I’m sure there is pressure on him to stay in this ‘club’ and there is no doubt that the talk radio and Fox News Channel audiences want to be safely riding the Trump Train without taking any truth-based detours. Pissing off the Trump cult is basically ratings death in the “conservative” media.

This isn’t all about ratings though. Talk radio in general is terrible at defending and much prefers to be on offense. Levin found a way to turn this whole Russia story into an attack on Obama, thus giving him back the boogeyman that you need as a punching bag when your team is in charge of nearly everything.

Trump heard about this through Breitbart and liked the idea of creating a target for his cult to blame. (This reminds me a lot of what Bill Clinton’s team did with Ken Starr during his impeachment saga.) He then added some juicy/fictitious details, knowing that being president would give him inherent plausible deniability, at least with his supporters, because, after all, he “has info no one else does.”

As for Levin, I emailed him yesterday politely explaining that I was going to write about how the guy who had once been my favorite radio host had devolved into a Trump sycophant and I asked for him to comment. As I expected, I did not get a response. Much like Trump in this latest flap, he simply has no legitimate defense.