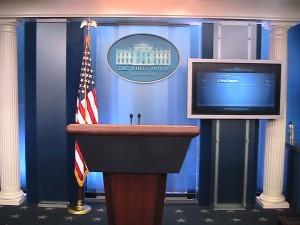 White House Press Secretary Jay Carney released a statement Monday afternoon expressing administration support for Sen. Harry Reid‘s (D-NV) debt ceiling compromise that raises the debt ceiling by $2.7 trillion, cuts spending by the same amount, and contains no revenue increases. Carney’s statement made clear that this was not the President’s preferred choice, but noted that “it removes the cloud of a possible default from our economy through 2012.”

The statement is a departure from the administration’s recent strategy of holding frequent briefings with reporters, with President Obama taking an unprecedented number of questions. The White House later announced that President Obama would address the nation from the East Room at 9pm, with only print pool reporters in attendance. That means he won’t be taking questions tonight.

Carney’s statement, released around 3 this afternoon, frames the Reid compromise as the result of House Republicans’ obstinacy:

The President has been advocating a balanced plan that would reduce our deficit by $4 trillion by making large cuts in domestic and Pentagon spending, reforming entitlement programs, and closing tax loopholes for corporations, millionaires and billionaires.  This sort of approach won support from Democrats and Republicans in the Senate, but the House Republicans walked away after insisting that the budget be balanced on the backs of seniors and the middle class.

Now, faced with the “my way or the highway,” short-term approach of the House Republicans, Senator Reid has put forward a responsible compromise that cuts spending in a way that protects critical investments and does not harm the economic recovery.  All the cuts put forward in this approach were previously agreed to by both parties through the process led by the Vice President.  Senator Reid’s plan also reduces the deficit more than enough to meet the contrived dollar-for-dollar criteria called for by House Republicans, and, most importantly, it removes the cloud of a possible default from our economy through 2012. The plan would make a meaningful down payment in addressing our fiscal challenge, and we could continue to work together to build on it with a balanced approach to deficit reduction that includes additional spending reforms and closing tax loopholes for corporations, millionaires and billionaires.

Senator Reid’s plan is a reasonable approach that should receive the support of both parties, and we hope the House Republicans will agree to this plan so that America can avoid defaulting on our obligations for the first time in our history. The ball is in their court.

Reid’s plan is likely to receive ample criticism from both sides. As Jake Tapper notes, Reid’s plan relies on savings from drawdowns in Iraq and Afghanistan, “a technique Republicans assail as gimmickry though the House GOP budget offered by Rep. Paul Ryan, R-Wisc., included the same savings.

The lack of a revenue component to the plan will be seen as a cave-in by liberals. Think Progress’ Matt Yglesias spins Reid’s plan as a  (maybe) de facto revenue increase, given the fact that the Bush tax cuts expire in 2012. If Democrats hold the line on letting them expire (an if the size of Godzilla’s dad).

The fact is, though, that the administration has repeatedly asserted (without drawing a line in the sand) that the President would not sign a plan that doesn’t contain revenue enhancements. If this isn’t a cave-in, it’s at least a falling stalactite or two.

There’s a chance, though, that this is a gambit to get a clean debt ceiling increase. Yglesias points out that the Reid plan overcomes the House Republicans’ two stated obstacles (dollar-for-dollar cuts and no tax cuts), without touching Medicare or Social Security. If the House Republicans don’t agree to a plan that meets their stated criteria, that will leave only default or a clean increase.

It is significant that the White House chose to release a statement instead of holding a briefing. Today’s press schedule listed the briefing time as “TBD,” which means they were at least mulling one. The decision to release a statement, through Carney, that ends with “the ball is in their court” could be an indication that this is the start of a staring contest, that this is their final offer. In poker, it’s a bit like throwing in a raise without even looking at your last card, giving your opponent something to think about for the next few hours. Look for the President to flip over that last card tonight.