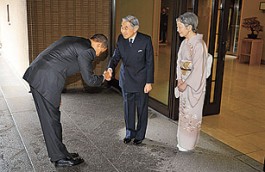 President Obama sometimes doesn’t have a lot of luck when it comes to timing. First there was Kanye West, followed by Joe Wilson, and now Sarah Palin going Rogue all over the President’s Asia trip. Once again a major Obama initiative has been seemingly trumped by spectacle (unless, of course, you are a Time reader). Moreover on top of getting submerged under a bunch of Sarah Palin madness the White House apparently feels that the coverage they did get Stateside was ‘asinine.’ From today’s Playbook:

THE WHITE HOUSE CONSIDERS THE MOTIF OF MUCH OF THE U.S. COVERAGE TO BE ASININE. A senior administration official: “American leadership was absent from this region for the last several years, despite the fact that it is increasingly central to our economic growth and our security. President Obama put our alliances on a firmer footing, reasserted our leadership in the region, and continued to advance a complicated bilateral relationship with China that will play a large role in shaping the 21st century.”

And this from David Axelrod, who apparently felt the need to point out that the trip to China was not about ticker-tape parades:

DAVID AXELROD, surrounded by White House reports after the two-question “news conference” at South Korea’s Blue House: “The goal on this trip was to lay a foundation for economic progress, to open up markets for American goods, to lay a foundation for progress on mutual security issues, … to lay groundwork on climate change. … Though the president is demonstrably popular in all these countries and polling reflects that, we didn’t come halfway across the world for ticker-tape parades. … So we believe it was a successful trip. … We didn’t have expectations that Barack Obama arrives in China or anywhere else and things change overnight.”

It’s not clear which coverage in particular the White House is upset with — Fox is not singled out — though, there does seem to be a bit of a ‘walk on water’ expectation that follows Obama wherever he goes. Perhaps instead it is just the pervading tone that Obama was too deferential to his hosts on this Asian trip as opposed to, say, merely trying to find some common ground. Considering the week we’ve had in the media, I think it’s safe to say Obama coverage hasn’t really made it ‘asinine’ quite yet.