Will President Obama Talk Gay Marriage, DOMA Repeal at State of the Union? 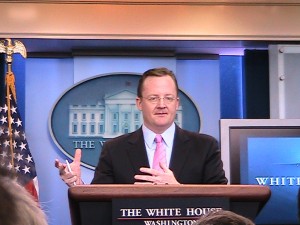 At Tuesday’s White House briefing, Robert Gibbs fielded several questions about the status of the repeal of DOMA (The Defense of Marriage Act), which he said, “given the current makeup of the Congress,” would be “inordinately challenging.”

Given President Obama’s recent remarks about his “evolving” opinion on same-sex marriage, and the fact that he used last year’s State of the Union address to promise the repeal of DADT, I asked Gibbs if the President might address the DOMA repeal, and his personal views on gay marriage, at this year’s SOTU.

White House Press Secretary Robert Gibbs today said it would be “inordinately challenging” to repeal the Defense of Marriage Act given the GOP takeover of the House.

He added that although President Obama supports repeal of DOMA, the administration is obligated to represent the federal government in two lawsuits challenging the law.

“The president believes … that this is a law that should not exist and should be repealed but at the same time we have to represent the viewpoint of the federal government,” Gibbs said at a Tuesday press briefing.

Even so, the State of the Union is as good a time as any for the President to show leadership on this issue, and perhaps influence public opinion. I asked Gibbs if he thought that might happen. He didn’t rule it out:

Tommy Christopher:  …recently the President told Jake that his personal view on same-sex marriage is evolving.  I wanted to know if he’s reached any new personal opinion on that; if that’s something we might hear about in the State of the Union.

MR. GIBBS:  I’m not aware that there is any change on that coming in the State of the Union.  At this point I would say that what he told Jake is very similar to what he told a group I think in October that asked a similar question.

Tommy Christopher:    Is it possible he might bring up DOMA during the State of the Union?

MR. GIBBS:  I have not finished going through the first draft, so I don’t know the answer to that.

Rather than make an obviously empty promise to repeal DOMA, or even to hold a symbolic vote (that would, let’s be honest here, put many Democrats in a tough spot, let alone Republicans), the President could speak honestly about his own struggle with the issue of same-sex marriage, and the ideas and stories that have influenced his personal feelings on the matter. In doing so, he would also bring into stark relief the fact that, even after the landmark repeal of DADT, equality under the law is still outside the grasp of many Americans.

It’s true that, as it stands, there seems to be little that can be done to change the law, but an orator of President Obama’s considerable skill could definitely change a few minds.