Winning the Budget Conversation: A ‘Luntz Memo’ For President Obama 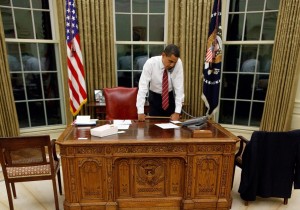 Rep. Paul Ryan created quite a stir a few weeks back by presenting a budget proposal that took the political media by storm. Just when it seemed President Obama was on the ropes, though, he came out swinging with a plan of his own that rejected key elements of Ryan’s plan which, if you believe the polls, almost every American rejects, as well. Why, then, does it appear that the President is playing the GOP to a draw, at best?

A huge part of the problem is a bubble-headed media that lauded Ryan, in unison, as “deserving credit” for putting forth a plan that addressed Medicare and Social Security, even as they trashed said plan as completely unworkable in the next breath. The President’s rebuttal, meanwhile, has drawn more attention for its “tone” than anything else. If you listen to the beltweay press, you probably think it’s Obama who is calling his opponents un-American mau-mau bastards from Hell.

That’s only part of the problem, though, and it’s not something that can be change all that quickly. The modern media, despite what others may say, is biased toward laziness and conflict, in equal measure, because the microscopic news cycle and American attwntion span demand it.

The other problem is the ten or fifteen percent of barely-engaged Americans who decide every election.

The liberal and/or conservative bases aren’t the problem. Whichever side you’re on, the other guys are just wrong, but they believe in something, and they’re sticking to it. At the very least, you know who they are, where they are, and that they’re probably not moving. The best you can do is try to keep them from showing up to vote.

But the squishy middle is easy to manipulate, and can whiplash back and forth like a rocket-powered ping pong ball. They swept Barack Obama into office hoping for change, and when everything wasn’t fixed in 18 months, voted en masses for the exact opposite of him. No matter which side you’re on, you have to admit that those people are idiots, the kind of people whose Inception dreamscape is a tic-tac-toe board. A losing tic-tac-toe board (they get complacent once they’ve secured the center square).

They call themselves “independents,” and their feather-light intellects are the true prize in this, or any, political  battle, and the reason the President and the Democrats aren’t clobbering the GOP on this is that they don’t know how to talk to these people. What the President needs is something akin to the infamous “Luntz Memo,” a handy glossary of terminology put together by pollster Frank Luntz to make health care reform seem like the second coming of Mao Tse Hitler Stalin-Sheen.

While the Democrats did manage to pass that legislation by a clam’s whisker, the memo was very effective, completely reshaping the debate, and setting the table for the Democrats’ midterm defeat.

The President is a very effective communicator in the macro, but when it comes to micro-managing language, his administration has given us things like “man-caused disaster” and “Overseas Contingency Operation.” The idea seems to be to make things sound “nice,” but the effect is to drain them of urgency.

The people in the middle need to be convinced of what’s in it for them, despite the fact that they possess a sense of invincibility that cannot be overcome. When you talk about people in need, the less fortunate, the elderly, the sick, these people think this will never be them. Even the ones who are old, sick, and poor think there’s something special about them that excludes them from these groups. In order to speak to them effectively, you’ve got to think like them, hear what they hear.

Since I don’t have access to focus groups and fancy polls like Mr. Luntz does, I have to rely on a slightly less conventional, but equally precise, method. I’ve isolated the words and phrases from the President’s recent speeches that make the “self-interested dick” portion of my psyche burp throw-up, and fine-tuned them for the swing-voter’s ears:

Fairness – This seems like a universally positive concept, but don’t be fooled. Any and all derivations of the word “fair” or “share” are poisonous, and should be avoided at all costs. Normal people support the idea of fairness, but the word conjures the bitter memory of every kid getting an award ribbon, or being forced to even out your pillowcases full of Halloween candy.

When the price of gas goes up, people don’t think, “Hey, that’s fair,” but they know they have to pay it. It’s the cost of living. Instead of framing progressive taxation as an issue of “fairness,” frame it as the “cost of living large.”

Deserve – The President talks a fair amount about what the American people “deserve,” things like dignity and respect, and an old age free of Alpo consumption. The problem is, people often think they “deserve” things (a promotion, a big fat raise, an extra slice of pecan pie) that they really don’t. Even when they do, it’s not something they are owed, but rather, a bonus, a perk, a reward.

Americans don’t deserve dignity, respect, and an old age free of Alpo consumption. Americans have earned them, because America has worked hard to ensure them.

Entitlement Reform – Medicare, Social Security, and Medicaid are all popularly referred to as “entitlements,” which immediately conjures the smug douchebags from the rich kids’ camp in Meatballs. Nobody likes them. The President refers to them as “commitments,” “programs” to which we all “contribute,” which “provide” us with this or that. While accurate, all of these terms make them sound like something nice that you do, as long as you can afford it, and “reforming” them is something the principal does when they’re caught smoking in the boy’s room.

Medicare, Social Security, and Medicaid are contracts, agreements that the government has made with us, and rather than allowing them to “reform” those contracts, they should be asking to renegotiate them with us.

Safety Net – A safety net is for crummy trapeze artists who should’ve paid more attention in trapezing school. A social safety net is even worse, it’s like Facebook for lazy, poor people. Either way, it’s not something the swing voter will ever need, because he knows his trapezin’.

Most healthy people don’t ever think they’re going to get sick, but they know that anybody can get hit by a bus. Programs like unemployment insurance, Medicaid, and food stamps are for Americans who find themselves in a financial emergency.

Give – This one drives me nuts. The President is always saying that the wealthy ought to “give back to their country,” or that they want to “give” more, but we just haven’t asked. The latter is an incredible farce that asks us to believe that the hiring of an army of tax accountants is the reluctant act of an “alien hand syndrome” sufferer, but the larger message is that taxes are a gift when paid by the rich. With that attitude, we’ll be lucky to have a treasury full of fondue pots.

This line of thinking never gets around to explaining what wealthy individuals and corporations get from America, which is mainly access to us. You know, the people who buy their crap, work for increasingly depressed wages, contribute 401k money to their hedge funds, and pay for the things that allow them to be successful.

Wealthy individuals and corporations aren’t “giving back to their country,” they are paying for what they have taken from our country.

Job Creation – Politicians always talk about job creation as though this activity is a means unto itself, as if the only thing preventing corporations from crapping out jobs is a lack of fiber in their diet. Even the Democrats, as they point out that the Bush tax cuts didn’t create jobs, don’t ever get around to explaining why.

Corporations are making record profits, yet they’re not creating jobs. Is that because the taxes are too high?

No, it’s because they don’t need any new employees, because nobody can afford to buy anything. It’s not sustainable, but for the time being, you can just charge more and cut costs to maintain those profits, but without consumers to create demand, there’s no reason to create any jobs.

Conversely, if there were suddenly a huge spike in consumer demand, do you think businesses would say, “Y’know, I’d love to service all of these new customers by hiring more, but with that 3% tax increase, I’ll just let my competitor pick up the slack?”