‘Would My Son Have a Place In Your America?’: Khizr Khan Appears In New Hillary Ad
Video

‘Would My Son Have a Place In Your America?’: Khizr Khan Appears In New Hillary Ad 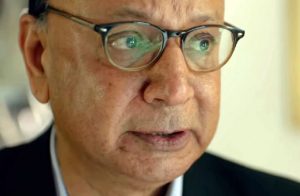 With less than three weeks left until Election Day, Democratic presidential nominee Hillary Clinton released a new campaign ad that has already received quite a bit of reaction.

In ‘Captain Khan,’ Khizr Khan ends the ad by saying, “I want to ask Mr. Trump, would my son have a place in your America?”

Reaction on Twitter was largely praiseworthy, with many discussing how emotional the ad made them.

This is one of the most powerful political ads of this cycle. Hands down.https://t.co/H34YIrMTTs

My nominee for best political ad of the cycle… Wowhttps://t.co/P3uBUS8PSe

Honestly, this is the most powerful ad of this entire campaign – or maybe any campaign: https://t.co/cJUbyxyF2x

This objectively made me cry. https://t.co/nz66YHBx1L

Watch the video above, via Hillary for America.