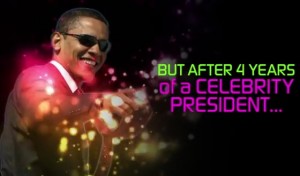 With the general election beginning in earnest (now that Newt Gingrich has decided to stand down), the effect of independent organizations on this election will be put to the test. The Karl Rove-co-founded American Crossroads, one of several pro-Republican SuperPACs expected to raise hundreds of millions in unlimited contributions to defeat President Obama this election, has released a new ad attacking the President’s “cool.”

The ad features clips of “Four years of a celebrity president,” which consist of President Obama’s recent appearance on Late Night with Jimmy Fallon, his off-air observation that Kanye West is “a jackass,” his impromptu tribute to Al Green, his brief jam-session cameo on “Sweet Home Chicago,” and that true mark of celebrity excess, the swilling of …a pint of Guinness???

He also kills a fly in the video, a naked attempt by Crossroads to swing the entomologist vote. (The Ellen Degeneres clip was from 2007.)

The ad dismounts with the central argument of this election: “Are you better off than you were four years ago?” vs. “We saved the patient, and he’s getting better. Do you really want to go back to the leeches?”

Curiously, American Crossroads’ ad doesn’t feature one of the President’s most celebrity-laden appearances, his dressing-down of Donald Trump at last year’s White House Correspondents Dinner, even as Seal Team Six was tooling up to do a Moe Green on Osama bin Laden. Now, that was cool.

Here’s the clip, from American Crossroads:

For three years and change, that’s not a whole lot of celebrity-ing, is it? If this knock had any merit to begin with , this would be a pretty weak case. They also seem to have forgotten that the 2008 McCain campaign tried this out:

How’d that work out for them, again?

There’s room for debate over whether things like the Fallon appearance have value (although there seems to be bipartisan consensus that they do), but like that 2008 McCain ad, this offering is unserious, and insults the viewers’ intelligence. It will probably work like a charm with independents.

The real significance of this ad, though, is that it foreshadows what the President will be up against this election. While he has out-raised Mitt Romney by huge margins in campaign cash, Republican SuperPACS have just as big an advantage over pro-Obama groups like American Bridge and Priorities USA Action, who apparently have little to offer the individual billionaire.