Your Moment Of Glenn: Beck Serves Up His New American Pie (Literally) 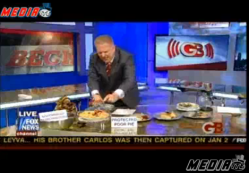 Alas, it’s slowly becoming clear that Glenn Beck may no longer be interested in using his nightly show to address the immediate concerns of the day. In the two weeks plus since the attempted bombing of Flight 253 Beck has yet to address it directly, or even mention any of President Obama’s statements on the matter (or in the beginning, the lack thereof). Instead, last week Beck spent his time re-fact checking his own show in response to Media Matters naming him the ‘mis-informer of the year’, and yesterday’s show was largely devoted to comparing Obama to Hugo Chavez.

It would seem that Beck, who announced sometime last week (I think…it may have been prior to the holidays) that his show would be taking a new direction in the new year is less interested in discussing the day to day news cycle than he is in…I’m not sure. But yesterday’s preview of an upcoming “documentary” on Communism (which perhaps is intended to be the penultimate conclusion to Beck’s recent focus on “communist” followers in the White House) may offer a hint: Beck appears to slowly be turning his show into some sort of extended American history lesson, wherein he presents the Beckian take on the American experience and then somehow connects it to our present day. I assume we are part way through the lesson on Communism. It’ll be interesting (completely alarming?) to see how many viewers will be able to note the difference between their textbooks and Beck’s version.

In the meantime, in lieu of a chalkboard to explain the economy (and its communist values) today Beck went literal and used a pie. Yes. To explain who gets a which piece of the economic pie, Beck cut up a rather tasty looking pie. Also, toy soldiers. The result not only actually makes basic sense, but may qualify as some sort of cable news show pop art installation piece. Highschool economics teachers everywhere take note! (Also, the end of the clip makes me think he be a great sub-in for Weekend Update.) Video below.