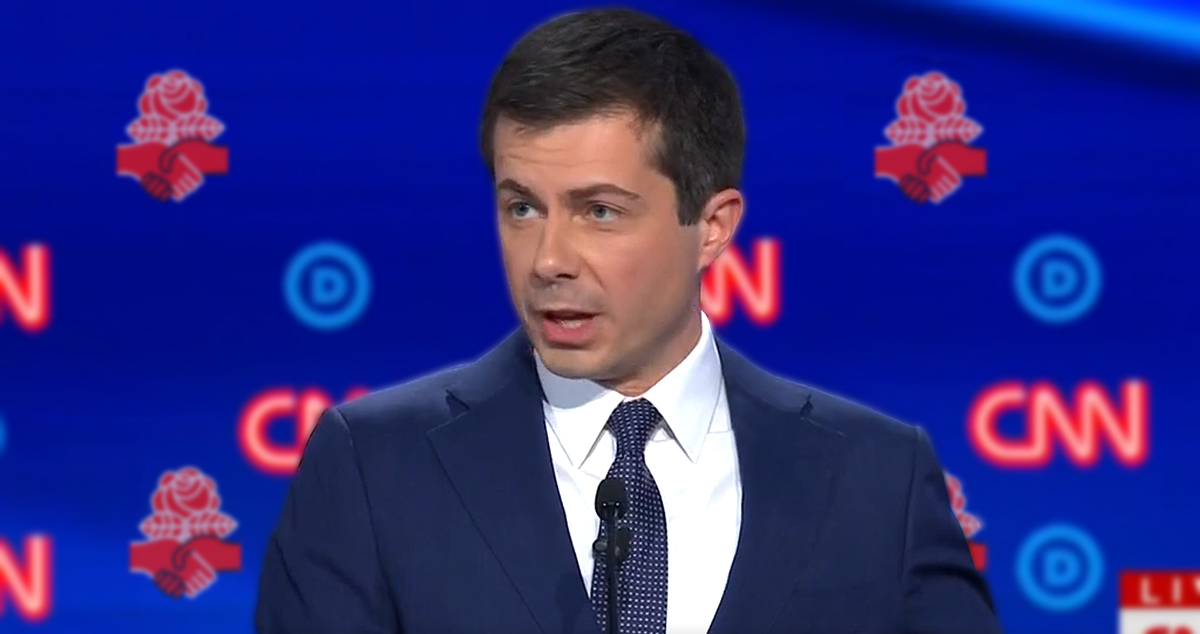 Mayor Pete Buttigieg has been a pretty big part of the post-CNN Democratic Debate debate online and on cable news this Wednesday, ahead of part two of the event Wednesday night. In particular, he’s in the spotlight for a comment he made, and about which Trump tweeted, regarding the label “socialist.”

The topic has come up a lot this year for Democrats. To listen to outlets like CNN or MSNBC anchors like Andrea Mitchell, it’s because of mean and underhanded attempts to smear Democrats with a heinous label that undermines them, and not all based on anything factual.

Of course, that’s totally preposterous. At the first night of the Democratic debate, there were complaints both onstage and afterward that questions posed were simply Republican talking points. Well that objection itself is a Democrat talking point, as is the idea that the socialism label is some unearned, unfair smear foisted upon those who would reject it.

That’s not to say some Democrats don’t reject that title. People of course object to being called certain things they think are unpopular, even if those things are true. That’s why even though Alexandria Ocasio-Cortez calls herself a socialist, and is a member of the Democratic Socialists of America, and touts the benefits of socialism and the evils of capitalism, her supporters online and on cable news still pretend it’s an unfair smear by someone else.

Nevertheless, it is also true, obviously, that regardless of how completely apt the term is, it is also beneficial politically to Republicans to repeat the word and the accusation when it comes to the Democratic party candidates, who are facing criticism for going “too far left” from many quarters (particularly those quarters which would prefer an establishment candidate like Joe Biden.)

That brings us to Tuesday night’s debate, during which surprise breakout star of the show Marianne Williamson joined the chorus of those worried about how Democrats will be portrayed and whether an embrace of the very far left is hurtful electorally.

Pete Buttigieg then had his moment.

“It is time to stop worrying about what the Republicans will say,” he said to applause. “It’s true that if we embrace a far-left agenda, they’re going to say we’re a bunch of crazy socialists.”

“If we embrace a conservative agenda, you know what they’re going to do?” he said. “They’re going to say we’re a bunch of crazy socialists. So let’s just stand up for the right policy go out there and defend it.”

That moment made a splash online, and it came up again on Wednesday morning, when Republican Senator John Kennedy went on Fox News and said “the less of two socialists is still a socialist.”

Some would say that fulfills Buttigieg’s prediction, but that’s only the case if you ignore the Mayor’s actual and clear intent (embrace the far left), ignore the actual circumstances (whether or not a particular policy is indeed on the socialist end), and disregard the actual material significance of the question to the election.

In reality, what Mayor Pete said, in context and as a response, was that there is no point in trying to embrace a so-called “conservative” Democratic point of view, because you’ll be called a socialist anyway, and therefore you should just embrace whatever socialist policy it is you were trying to avoid for the sake of electoral gain.

And likewise, in reality, some of these policies are indeed socialistic, or “democratic socialism” as is the en vogue phrasing, and are not, for example, free-market capitalist.

That is so even if Kennedy in particular would call any Democrat a socialist. Which it is apparent that he would. Because the point Buttigieg made wasn’t “Republicans call people socialists,” but rather “if you’re going to be called one, might as well be one.”

The entire situation, of course, was exacerbated by President Trump tweeting about it. So now it will be a given, known fact among the press as well as Democrats that not only are all the Democrats on stage very obviously non-socialist, but that any suggestion otherwise is stark lunacy. In direct contradiction of the actual facts. Because that is how it works when Trump touches something. Or at least, that’s how it works at CNN and MSNBC. At Fox News, it’s the reverse.

Universal Medicare, for examplel is, by its nature, a socialist reform, both in the sense of effectively nationalizing an industry and in the more idiosyncratically American sense of “anything done by the government rather than private industry.” Its proponents would place it under the Democratic Socialism agenda. It is expressly not capitalist. That doesn’t inherently make it wrong or evil, it just is the thing that it is. Political implications don’t change actual facts.

Likewise, when Mayor Pete offered his construction of options for Democrats, he was very plainly saying “don’t bother to pretend to be conservative, it won’t get you anything, so you might as well embrace this far left policy.”

It is a rather whining complaint among Democrats right now that people ask them whether being or embracing the positions of the farthest left of the party will hurt them electorally, but it’s a real question because it actually might.

If it wouldn’t hurt them, friends, then why would they be so worried about being identified that way?

Mayor Pete is right. You can’t embrace universal free health care, universal free tuition, and the host of other government goodies being pitched by Democrats right now and not be called socialist. It will happen.

But that’s only because it’s correct.

POST-SCRIPT: Whenever this topic comes up, someone inevitably asks “what’s so scary about socialism” or “why are you afraid of socialism?” Frankly, I should be asking YOU that question. That is part of Mayor Pete’s point, after all. Why hide from the term, he is asking. That’s a good question. Why are you? Is it actually you that hates having public roads, random Democrat on Twitter?