BEAN FIGHT: Dunkin Donuts Exec Throws Shade at Starbucks For Getting Political
SHUT UP AND BREW 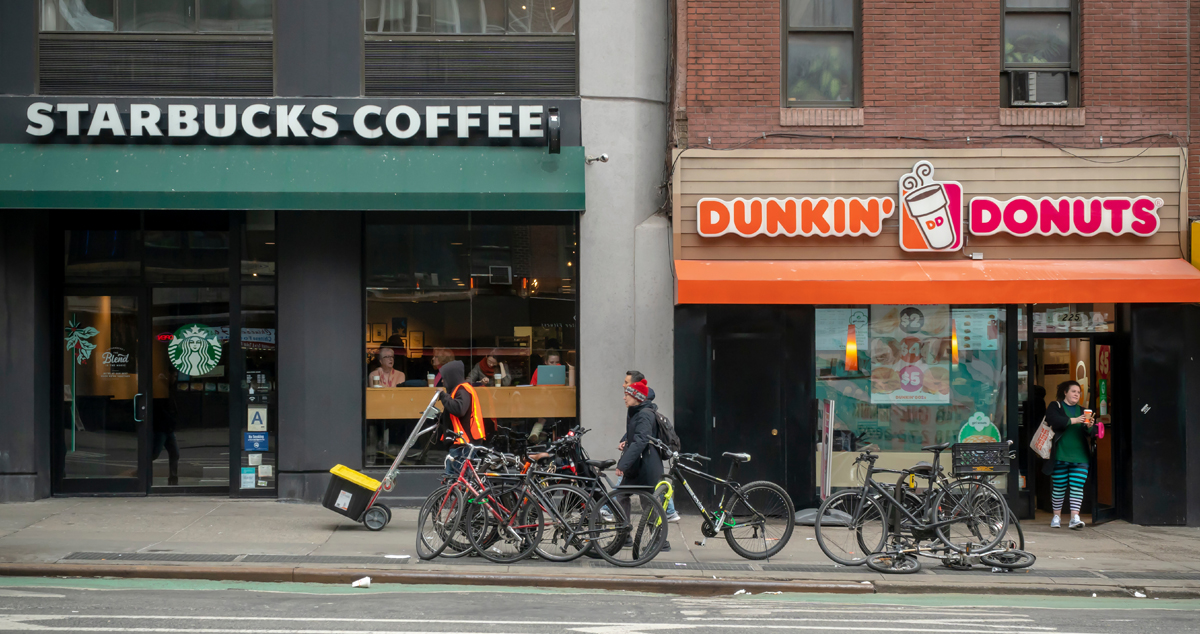 Sometimes a cup of coffee is just a hot drink. Well actually, if you’re Dunkin’ (formerly Dunkin’ Donuts), it’s just a hot drink every time, whereas, if you’re Starbucks, it’s almost never just that. And on Monday, an executive with the former took an espresso shot at the latter over that fact.

At the 141st International Trademark Association Annual Meeting, a Dunkin’ executive made the comment separating their business and brand from that of coffee king Starbucks. “We are not Starbucks, we aren’t political,” the unnamed executive is quoted as saying.

“We aren’t gonna put stuff on our cups to start conversations. We don’t want to engage you in political conversation, we want to get you in and out of our store in seconds. It’s donuts & ice cream– just be happy,” reads the quote as tweeted by law professor Alexandra J. Roberts, who writes about the intersection of social media with brands and trademarks.

"we are not starbucks, we aren't political– we aren't gonna put stuff on our cups to start conversations. we don't want to engage you in political conversation, we want to get you in & out of our store in seconds. it's donuts & ice cream– just be happy."#dunkin #inta2019

A subsequent tweet shows a quote that is typical for a trade conference or any sort of branding symposium, but also illustrates the point that Dunkin’ is there to focus on their business. Both there at the conference and there at their locations, all of which are franchises.

"guests who come in just for coffee & nothing else–we call them one-armed bandits. we'd love to be able to get a bag in that other hand!"#dunkin #inta2019

Starbucks famously does get political, and that doesn’t just refer to former CEO Howard Schultz and his big for the presidency; the company has been at the center of more than one social/political issue over the years. The #RaceTogether campaign certainly comes immediately to mind. If you’re not too familiar with it, this satirical video from BlazeTV might help.

There was also the time Starbucks vowed to hire 10,000 refugees in response to the Trump travel ban. Even the color and style of their cups at the holidays is a political issue.

If that’s ever been the case at Dunkin’ Donuts it’s news to us. And to them, it seems.

And it actually does matter to the business. In fact, the degree of involvement of Starbucks in politics, as well as other companies (almost always “progressive” politics) has been the subject of countless analysis and opinion articles regarding the impact on their bottom line. Typically, the conclusion is that the impact is very little, none, or a net positive for the company, though a lot of those stories are months or years old.

At the INTA meeting happening today, there may be a strong indication that the politics have proved to be a problem after all.

TIL brands are downplaying big promotions & quaking in fear because they really don't want donald trump to tweet about them. #inta2019

The Trump effect. It’s everywhere. Even at meetings with the most boring names in the history of meetings, like the 141st International Trademark Association Annual Meeting.