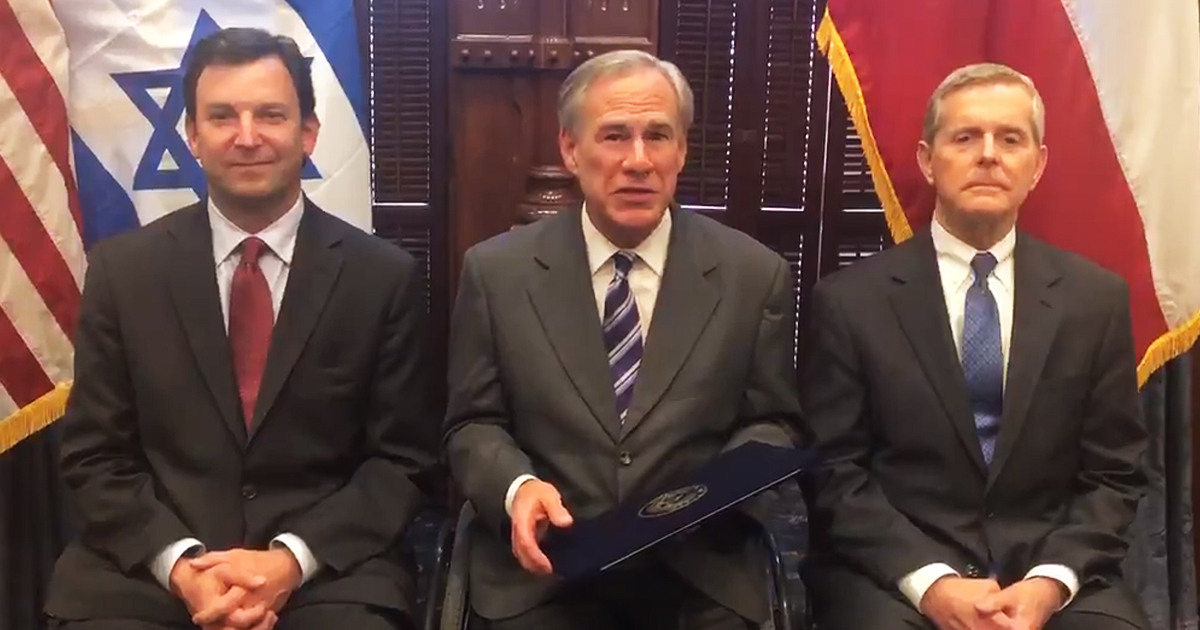 Texas Gov. Greg Abbott, somewhat out of the blue on Wednesday, laid fire down on alternative social media service Gab, calling it an “Anti-Semitic platform” that does not “represent Texas values.” But his own state party is a big, if recent, Gab user.

The clip of Gov. Abbott slapping down Gab hit Twitter by Abbott’s own hand on Wednesday, catching both left and right commenters a bit off-guard, having seemingly no particular prompting.

The video features Texas state representatives Phil King and Craig Goldman flanking the governor, who delivers his commentary while in front of the flags of the United States, Israel, and Texas.

The legislation may refer to HB 1555, introduced by Goldman, which is captioned “Relating to the continuation of the Texas Holocaust and Genocide Commission as an advisory committee to the Texas Historical Commission.” Although nothing in the bill to continue the commission directly relates to Gab, or to social media in general.

Substack writer Nick Martin noted, as did many others, that the swipe seemed to come out of nowhere.

But also, it’s not clear what this is about! I don’t see any local reporting on it. Neither the governor nor the lawmakers with him appear to have put out press releases or statements on the matter. But the small social media company and a lot of right-wingers are very upset.

Late Wednesday night, Gab posted a response to Abbott that said in part:

Tonight Texas Governor Greg Abbott, a “Republican,” issued a despicable and false statement smearing Gab as an “anti-semitic platform that quote “has no place in Texas.” This is the same Gov. Abbott who just five days ago said he was “taking a stand against Big Tech censorship.”

Gov. Abbott’s statement will likely not sit well with the nearly 800,000 Texans who have visited Gab.com in the past 24 hours alone. What is even more strange is that the Texas GOP itself is on Gab with a verified account.

The Texas GOP in fact does have a thriving Gab account. It was established after the attack on the U.S. Capitol in January. The state party made a big announcement of that fact on Twitter.

That tweet came just days after the Anti-Defamation League called on the Justice Department to investigate Gab and CEO Andrew Torba as having “contributed to violations of federal criminal law” in relation to the Capitol attack, in much the same way that social media site Parler was accused at the time.

“In addition to holding individuals who broke the law accountable, the authorities must fully determine whether social media platforms, particularly Gab, bear a measure of responsibility for the attack as well,” said the ADL statement.

Although Gab’s statement on Wednesday insisted it “is not an ‘anti-semitic’ platform,” it was, like more recent example Parler, deplatformed back in 2018. In that case, over anti-Semitism and the Pittsburgh synagogue shooter. And even though Gab’s statement framed anti-Semitic sentiment prominent on the service as being a product purely of the fact that they permit even objectionable speech “because in this age of cancel culture nobody else will,” the official Gab account on Twitter demonstrated ample affinity at the time of that deplatforming.

“The enemies of freedom smear us with every name in the book because they hate America and they hate free speech. It’s a shame to see a GOP politician fall for this trap when conservative values are under sustained attack all over the country,” Gab said of Gov. Abbott’s brief clip.

Still, the backlash from the Twitter right was pretty immediate, if not totally informed.

I’m on Gab. Republicans in Congress are on Gab. I’ve never once seen an anti-Semitic post on @getongab and if I did, I’d do the same thing I do when I see one on twitter (which I’ve seen hundreds if not thousands of times), I’d call them out and explain why it’s disgusting.

Most of the backlash was more broadly about the idea of cancel culture, though.

Dumb. Gab is not an “Antisemitic platform”—there are plenty of antisemites on Twitter.

What you’re doing is allowing the Left to bully you into demanding viewpoint discrimination and content moderation. I hate this stuff too, but you either live with it and be free—or not. https://t.co/mjRWsNSRvv

This year has convinced me that @GovAbbott just isn’t smart enough to have a future in national politics. Has he thought through any of these things?

Once you accept the NYT, ADL, or the DailyBeast’s narrative that VIEWPOINT NEUTRALITY = HATE, you’re down the slippery slope.

It may be unfair to paint the Gab userbase as uniformly or even widely anti-Semitic, but Gab’s claims to viewpoint neutrality or distancing itself from anti-Semitism that may be posted by users does not change that the platform itself does have its own history to account for. 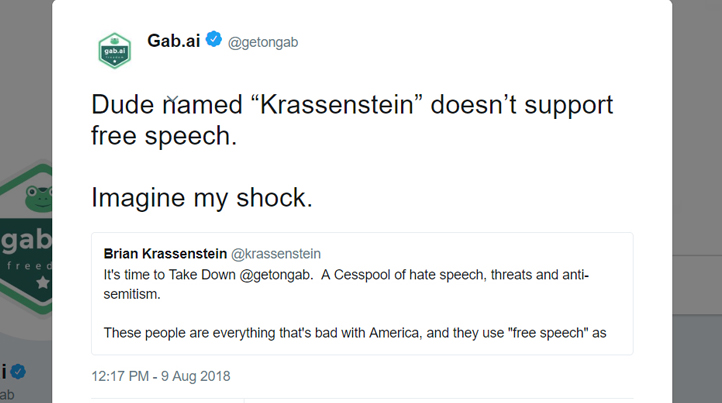 Still, it’s not immediately clear what prompted the sudden and pointed attack by the Texas Governor. With Texas GOP Chair Allen West a popular topic on the service, and the state party previously extensively promoting Gab, there could be more back-and-forth drama ahead in the wake of the video.