David Letterman is the Talk of the Town; New Yorker Examines Blackmail
Read This

David Letterman is the Talk of the Town; New Yorker Examines Blackmail 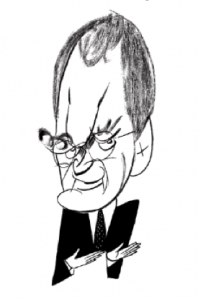 A “Talk of the Town” item in this week’s New Yorker uses the extortion case involving Dave Letterman and CBS producer Robert Halderman — which keeps getting weirder and weirder, and doesn’t look like it’s going away any time soon — as a jumping-off point for a broader discussion about blackmail.

Moral-reasoning pop quiz: There’s a ﬁlm coming out—a thinly disguised portrayal of a media mogul — and word is that if it’s released it will hurt the mogul’s reputation. Powerful people intervene: they call a meeting and oﬀer the movie studio money — eight hundred and forty-two thousand dollars—to scrap the movie and destroy the negatives. Would it be wrong for the studio to take the money? “It’s an interesting question,” James Lindgren, a law professor at Northwestern, said last week. The mogul in question was William Randolph Hearst, and the movie was Orson Welles’s “Citizen Kane.” The studio turned down the oﬀer, but, Lindgren asked, “had they given in and taken the money, could the studio have been prosecuted for extortion?”

Widdicombe continues by questioning the essence of blackmail, citing several law professors and blackmail experts, arriving at the question: If screenwriting is legal, and exchanging $2 million with somebody else is legal, what’s wrong with putting them together? Definitely worth a read.

Illustration courtesy of The New Yorker.