‘Dishonest and Despotic’: Trump Decried By Supporters and Critics For Speech Declaring Victory in 2020 Election 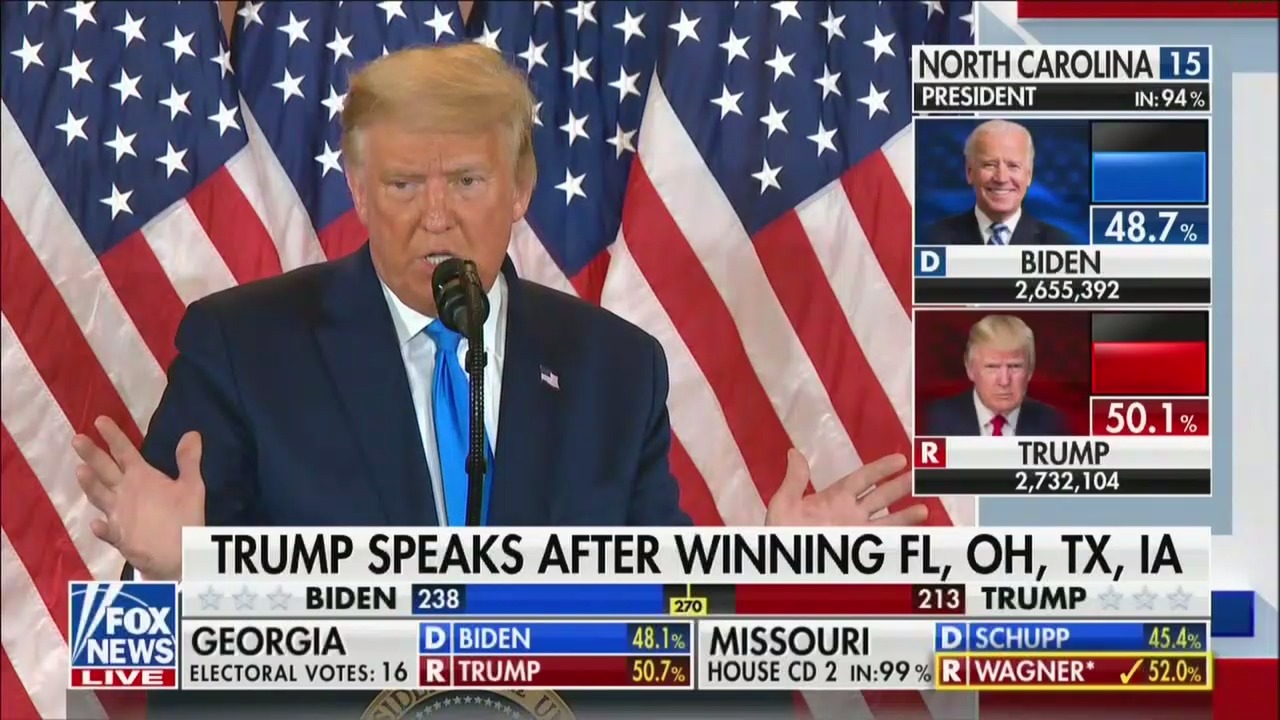 Trump said it was “clear” he had won states like Georgia and North Carolina, which have not yet been called by any outlet, as the votes are still being counted.

“This is a fraud on the American public,” the president claimed, before falsely declaring, “Frankly, we did win this election.”

“We want all voting to stop,” Trump added, again falsely claiming “As far as I’m concerned, we already have won it.”

Both Trump supporters and detractors took to Twitter to decry the president’s declaration.

The President of the United States pretending that the night was going his way until the election was stolen from him is disgusting and shameful. Just wait for the votes for ffs.

That was one of the most dishonest and despotic speeches ever given by a president of the United States.

Everyone is desensitized to it, but we really should be scandalized by what the president just did. It was dangerous, irresponsible, and terrible for the country. Also completely in character.

On top of the sheer irresponsibility of it, Trump contradicted himself on whether he wants the votes to keep being counted or stop being counted

No, Trump has not already won the election, and it is deeply irresponsible for him to say he has.

This is the nightmare scenario we were worried about.

We’re starting to move into the scenarios many folks feared, with a premature declaration of victory with thousands upon thousands of votes still to be counted. https://t.co/WnpVbHZdSF

If there was ever a moment for Trump’s most shameless enablers—you know who you are—to draw a line and defend the institutions of our country, this would be it.

The president is subverting democracy. He is attempting to delegitimize hundreds of thousands of legally cast votes.

Trump’s claim to have won Georgia is highly dubious. No network has called it. He’s only ahead by 2.5 points there, and the outstanding votes are mostly mail votes in very blue counties, likely very Democratic. Biden may even be a slight favorite there. https://t.co/dtj6h9jFEx

And all the networks are carrying it live. And they all knew he would do exactly this.

Almost everything the president is saying right now is not true.

“It is also clear that we have won Georgia,” Trump claims.

The state of Georgia has not been called. His lead stands at 118,000 votes.

This is not, as Trump claims, a “news conference.”

It’s a campaign event at the WH which is illegal. https://t.co/npiOTzgEzR

Trump just said “we did win the election”

well there it is. true darkness. expected it and yet still. i don’t know what to say.

The president of the United States has falsely declared victory and demanded an end to the counting of legal votes, an end to representative democracy, an end to legitimate governance. We’ve deployed soldiers to other countries for doing what he just did

Trump just said “we did win this election.” He is suggesting that any change in the status quo is de facto fraud. That dog won’t hunt in courts. Many votes remain to be counted. He is certainly ahead in key states and has arguments to make but this will be neither easy nor quick.