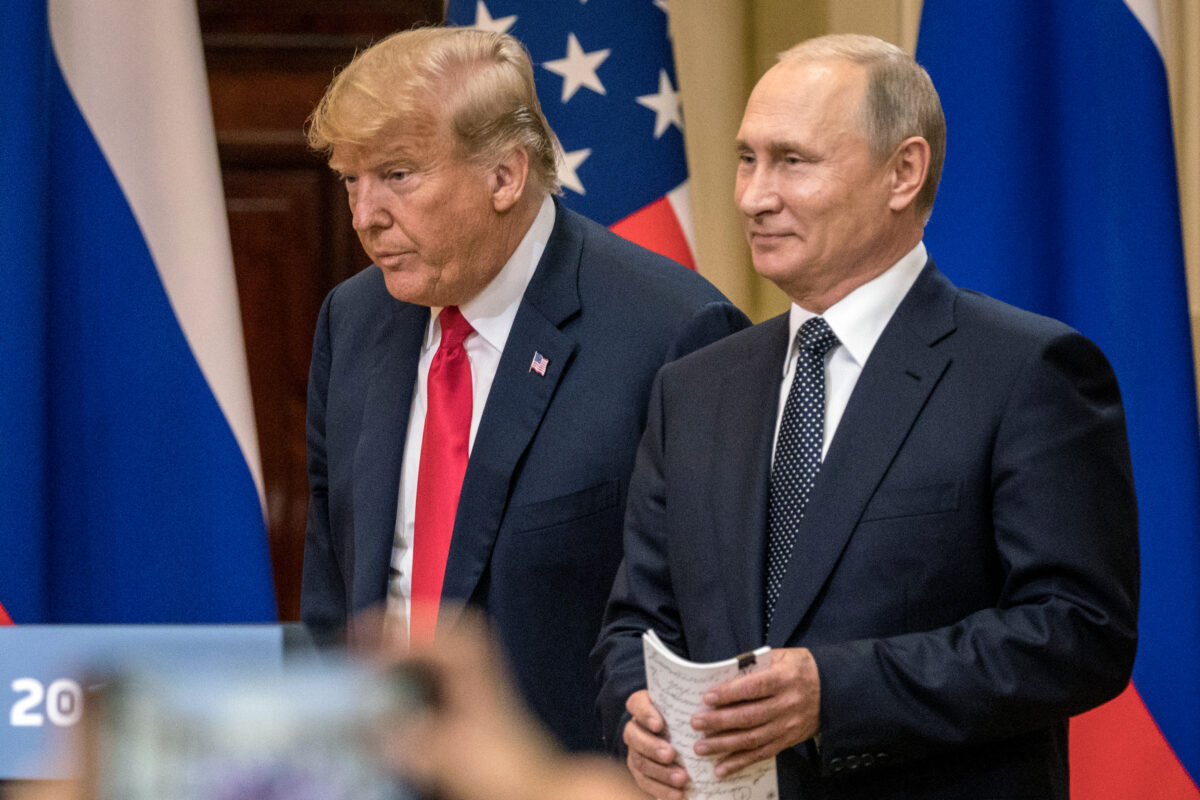 Leaked documents from the Kremlin obtained by The Guardian reportedly reveal a plot to put Donald Trump in the White House approved by Russian President Vladimir Putin in January of 2016. The Kremlin has dismissed this report as “great fiction.”

Former President Trump was the focus of a Department of Justice investigation led by Special Counsel Robert Mueller, which did not lead to any charges against the 45th president, but did uncover Russian intel operations designed to destabilize the American electorate and help elect Trump to the highest office.

The Guardian opens with a stunning lede: “Vladimir Putin personally authorised a secret spy agency operation to support a ‘mentally unstable’ Donald Trump in the 2016 US presidential election during a closed session of Russia’s national security council, according to what are assessed to be leaked Kremlin documents.”

The report features screenshots of the documents in question, which they reportedly have shown to independent experts who claim “they appear to be genuine. Incidental details come across as accurate. The overall tone and thrust is said to be consistent with Kremlin security thinking.”

The key meeting took place on 22 January 2016, the papers suggest, with the Russian president, his spy chiefs and senior ministers all present.

They agreed a Trump White House would help secure Moscow’s strategic objectives, among them “social turmoil” in the US and a weakening of the American president’s negotiating position.

By this point Trump was the frontrunner in the Republican party’s nomination race. A report prepared by Putin’s expert department recommended Moscow use “all possible force” to ensure a Trump victory.

Western intelligence agencies are understood to have been aware of the documents for some months and to have carefully examined them. The papers, seen by the Guardian, seem to represent a serious and highly unusual leak from within the Kremlin.

The Guardian also reports that the leaked papers make reference to compromising material, or kompromat, in possession, but that the specifics are buried in an “appendix” not made available:

There is also apparent confirmation that the Kremlin possesses kompromat, or potentially compromising material, on the future president, collected – the document says – from Trump’s earlier “non-official visits to Russian Federation territory”.

The paper refers to “certain events” that happened during Trump’s trips to Moscow. Security council members are invited to find details in appendix five, at paragraph five, the document states. It is unclear what the appendix contains.

As Twitter user Southpaw notes with the right amount of skepticism about the kompromat report: “It might be a little on the nose for these purportedly highly secret documents to leak but the appendix described here to remain a McGuffin just beyond everyone’s reach”

Charges of “collusion” between the Trump campaign and Russia have been largely derided by Trump and his media surrogates. However, the Senate Intel Committee report on the matter did find ample evidence of senior campaign officials communicating with what is now known to be Russian operatives. That report came from a Senate that featured a Republican majority, and the committee was chaired by Sen. Richard Burr (R -NC) and arrived at the following conclusions:

The Committee found that the Russian government engaged in an aggressive, multi-faceted effort to influence, or attempt to influence, the outcome of the 2016 presidential election. Parts of this effort are outlined in the Committee’s earlier volumes on election security, social media, the Obama Administration’s response to the threat, and the January 2017 Intelligence Community Assessment (ICA).

The fifth and final volume focuses on the counterintelligence threat, outlining a wide range of Russian efforts to influence the Trump Campaign and the 2016 election. In this volume the Committee lays out its findings in detail by looking at many aspects of the counterintelligence threat posed by the Russian influence operation. For example, the Committee examined Paul Manafort’s connections to Russian influence actors and the FBI’s treatment of reporting produced by Christopher Steele. While the Committee does not describe the final result as a complete picture, this volume provides the most comprehensive description to date of Russia’s activities and the threat they posed. This volume presents this information in topical sections in order to address coherently and in detail the wide variety of Russian actions. The events explained in these sections in many cases overlap, and references in each section will direct the reader to those overlapping parts of the volume. Immediately below is a summary of key findings from several sections.

When reached for comment by The Guardian, Putin’s spokesman Dmitri Peskov said the idea that Russian leaders had met and agreed to support Trump was “a great pulp fiction” when contacted Thursday morning.

Documents “leaked” from the Kremlin should always be met with healthy circumspection, as Russian disinformation campaigns designed to roil foreign countries are well documented. The Guardian is a reputable news outlet that its critics see as having a left-of-center agenda. How this story is reported — more “Russia, Russia, Russia!” or “I told you so!” — will likely speak volumes about other news outlets.

Read the full report at The Guardian.