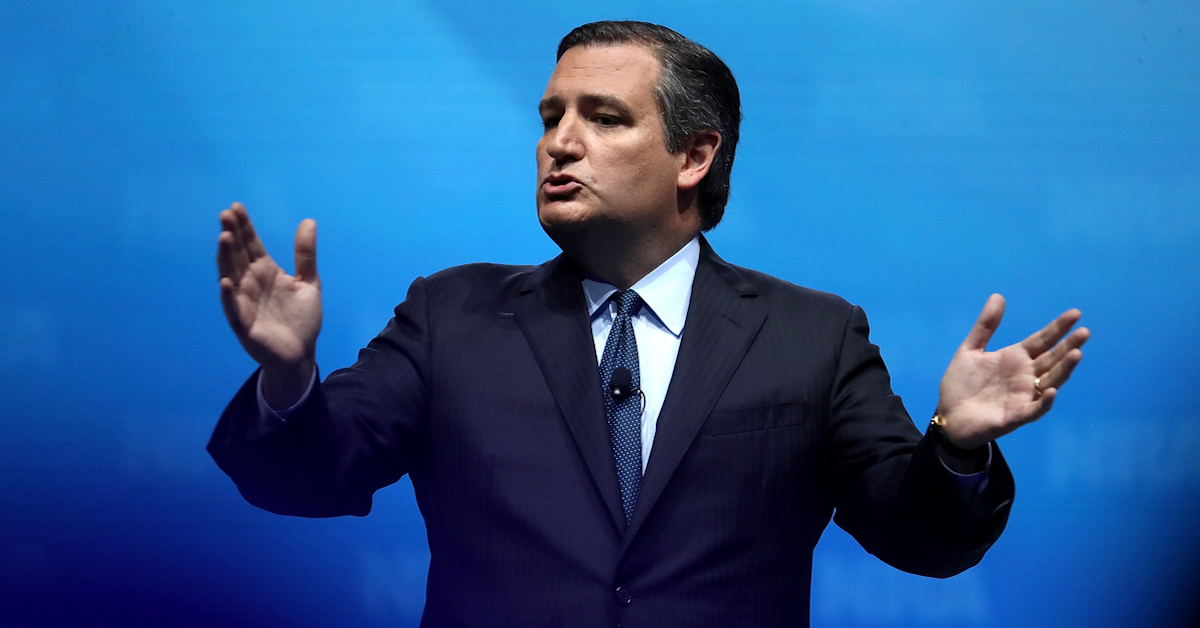 Perhaps taking a notes from President Donald Trump, Sen. Ted Cruz has tweeted 12 times about the New York Times in the last 24 hours.

The Texas Republican went off on the Times in response to a transcript, published by Slate, of comments by New York Times executive editor Dean Baquet at a company town hall last week. The transcript prompted Cruz to label the Times “propaganda”:

There was a time when journalists covered “news.” The NYT has given up on even pretending anymore. Today, they are Pravda, a propaganda outlet by liberals, for liberals. These remarks at their “town hall” are a scandal & would be a firing offense at any real journalistic outlet. https://t.co/3xZiABaBYv

He then implored his followers to read the transcript, before inventing a quote for Baquet:

If you care about journalism, or the First Amendt, READ the transcript. The Editor says (in effect) “for 2 yrs, we covered ‘Russia, Russia, Russia,’ facts be damned; now we’ll scream ‘racism, racism, racism’ for 18 mos, and the rest of the media follow us.” That’s not journalism. https://t.co/TPkpB0DjNj

Cruz’s Baquet quote is at best an uncharitable reading of the Times editor’s comments to staff. Here is the start of his speech referenced by Cruz, delivered to the Times newsroom before taking questions:

This is a really hard story, newsrooms haven’t confronted one like this since the 1960s. It got trickier after [inaudible] … went from being a story about whether the Trump campaign had colluded with Russia and obstruction of justice to being a more head-on story about the president’s character. We built our newsroom to cover one story, and we did it truly well. Now we have to regroup, and shift resources and emphasis to take on a different story. I’d love your help with that. As Audra Burch said when I talked to her this weekend, this one is a story about what it means to be an American in 2019. It is a story that requires deep investigation into people who peddle hatred, but it is also a story that requires imaginative use of all our muscles to write about race and class in a deeper way than we have in years. In the coming weeks, we’ll be assigning some new people to politics who can offer different ways of looking at the world. We’ll also ask reporters to write more deeply about the country, race, and other divisions. I really want your help in navigating this story.

Critics of the Times — including Cruz — have seized on those comments as evidence that the paper manufactured the Russia story to attack Trump, and now that the investigation has concluded, they have to move on to casting Trump as a racist.

As The Daily Wire wrote, absurdly: “The transcript showed the editor explaining that since the claim that President Donald Trump colluded with Russia to steal the 2016 election fell apart, the paper will now publish stories claiming Trump is a racist for the rest of his presidency.”

That’s a gross distortion of Baquet’s comments. The Times editor, in his remarks to the newsroom, was stating that the dominant story of the first two years of Trump’s presidency was the Russia investigation. And for good reason: the president of the United States was under investigation for potentially cooperating with Russian meddling in an election. The Mueller investigation found that Russians meddled to help Trump’s campaign and that Trump sought to thwart the investigation.The probe convicted Trump’s campaign manager Paul Manafort, national security adviser Michael Flynn, and personal lawyer Michael Cohen as part of the investigation. It was an indisputably massive story, and one the Times won two Pulitzer Prizes for — a point Baquet mentioned at the town hall:

OK. I mean, let me go back a little bit for one second to just repeat what I said in my in my short preamble about coverage. Chapter 1 of the story of Donald Trump, not only for our newsroom but, frankly, for our readers, was: Did Donald Trump have untoward relationships with the Russians, and was there obstruction of justice? That was a really hard story, by the way, let’s not forget that. We set ourselves up to cover that story. I’m going to say it. We won two Pulitzer Prizes covering that story. And I think we covered that story better than anybody else.

The day Bob Mueller walked off that witness stand, two things happened. Our readers who want Donald Trump to go away suddenly thought, “Holy shit, Bob Mueller is not going to do it.” And Donald Trump got a little emboldened politically, I think. Because, you know, for obvious reasons. And I think that the story changed. A lot of the stuff we’re talking about started to emerge like six or seven weeks ago. We’re a little tiny bit flat-footed. I mean, that’s what happens when a story looks a certain way for two years. Right?

I think that we’ve got to change. I mean, the vision for coverage for the next two years is what I talked about earlier: How do we cover a guy who makes these kinds of remarks? How do we cover the world’s reaction to him? How do we do that while continuing to cover his policies? How do we cover America, that’s become so divided by Donald Trump? How do we grapple with all the stuff you all are talking about? How do we write about race in a thoughtful way, something we haven’t done in a large way in a long time? That, to me, is the vision for coverage. You all are going to have to help us shape that vision. But I think that’s what we’re going to have to do for the rest of the next two years […]

That will remain part of the story, but this is a different story now. This is a story that’s going to call on different muscles for us. The next few weeks, we’re gonna have to figure out what those muscles are.

An editor identifying the big stories that his newsroom should be prepared to cover is not a scandal. Cruz, a very smart guy, ought to understand this.