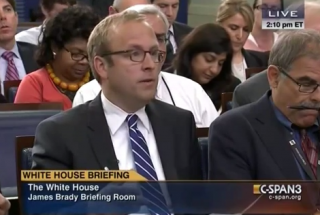 Given the unfolding rebellion in Iraq, how can the White House claim the end of the Iraq War and the “decimation” of al Qaeda as “two signature achievements”? That was the key question posed by ABC reporter Jon Karl to White House spox Jay Carney on Thursday afternoon.

“There is no question that the president pledged to end the War in Iraq and he did,” Carney immediately responded, prompting Karl to question: “There is no war in Iraq now?” And so Carney clarified: “[No] U.S. combat mission in Iraq.”

Carney defended the administration’s being a “good partner” to the Iraqi government — such as providing assistance at their request — and suggested that “Iraq’s future has to be decided through reconciliations within Iraq and a unified approach to dealing with the challenge posed by a group like the ISIL.”

Karl pushed once more on the White House claims of al Qaeda “decimation,” considering how an al Qaeda-linked group of militants have just taken over the second-largest city in the country.

“Core [al Qaeda], based in Afghanistan and Pakistan, have been severely compromised and decimated. I don’t think anybody would disagree with that,” Carney responded. “I don’t think you can argue that when it comes to the Afghanistan and Pakistan region, that the strategy of going after core al Qaeda leadership has not been effectively prosecuted.”

Pushed once again on the same question, Carney told Karl: “I would have to remind you that the most severe military attack on the United States in our lifetimes occurred and was ordered out of Afghanistan and Pakistan by core al Qaeda.”