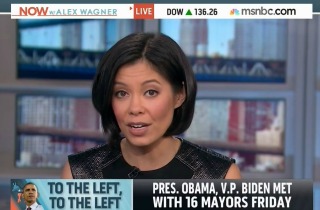 Just over a year ago, in the immediate wake of National Security Advisor Susan Rice’s announcement that she was withdrawing her name as a potential candidate to replace Secretary of State Hillary Clinton, NBC News Chief White House Correspondent Chuck Todd declared that Rice had been a “victim” of conservative “advocacy media.”

The term, one that more media outlets should adopt, is especially descriptive. It is a phrase that applies aptly to the home of Todd’s daily news program, MSNBC. There, an interesting phenomenon has been developing over the last month: Several of the network’s hosts offering undiluted support for the rise of a progressive insurgency within the Democratic Party for whom even President Barack Obama is too much of a pragmatic centrist.

This phenomenon has been the subject of a handful of recent columns in which I ask how MSNBC’s hosts, who so accurately critique the tea party for having pushed the GOP to the right of the American electorate, can fail to recognize the same curious movement forming within their own ranks. But this blind spot has never been so unmistakably exposed as it was Monday on MSNBC’s Now with Alex Wagner.

The Now panel spent the first segment predictably dissecting the public feud between “establishment” and insurgent conservative forces within the Republican Party. But without a hint of self-awareness, the panel pivoted just two segments later to championing and fostering the development of a progressive version of tea party:

“It’s going to take a long time for the Republicans,” observed Slate Group editor-in-chief Jacob Weisberg in a discussion about internal GOP feuding over a recent bipartisan budget deal. “But I think some forces of reasonableness and moderation are beginning to reassert themselves.”

Wagner wondered if the GOP could convince the factions within the party to support anything “reasonable,” given how the Republican Party has nursed the impression among conservatives that compromise with Democrats is tantamount to surrender.

Daily Beast columnist Michael Tomasky agreed and added that the idea that there is that sort of vibrancy within the GOP is not supported by facts. He said that Democrats, not Republicans, are having the real substantive conversation about their philosophical approach to tackling the nation’s problems – more on that later.

Finally, New York Magazine contributing writer and author Robert Draper observed that, regardless of the substance of the intra-party conversation today, the GOP will have to adapt their views and policy approaches in order to appeal to more voters. “They’re still doing this tightrope – this balancing act between trying to appease this very loud, very activist base,” he said, “and trying to grow their electoral base, which has clearly been diminishing.”

There is little here to dispute. All of the above could and should be considered sound political analysis. But in a segment just one programming block later, the panel guests cast off their analyst hats in a synchronized display and don their activist chapeaus in a segment championing the rise of an insurgent progressive movement within the Democratic Party:

“Sustaining progressive priorities will be challenging,” Wagner warns after reading tea leaves regarding the White House’s staffing decisions, arriving at the conclusion that Obama intends to myopically focus on “income inequality” and environmental reforms in his second term.

Unsurprisingly, her guests agreed and offered nothing in the way of a counter-narrative focusing on the political land-mines that will impede the progress for those intrepid revolutionaries on The Long March. The MSNBC panel spent much of their time consumed with the policy hurdles that frustrate liberal lawmakers, but no time was devoted to understanding, or even asking, if the American electorate will reward a Democratic Party that sidelines its moderate voices.

Last week, House Speaker John Boehner (R-OH) took a step that would have been unthinkable just weeks ago, let alone just after the conservative wave election of 2010: He scolded conservative outside groups for misleading their followers and pushing GOP lawmakers to balk at legislative compromise.

It is not difficult to envision a scenario in which MSNBC, after a few election cycles in which Democrats sacrifice a few winnable seats on the altar of progressive purity, is the target of terse rebuke from the Democratic leaders.