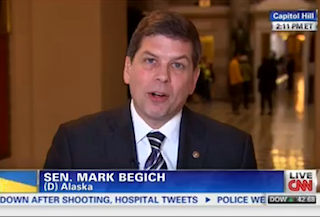 Sen. Mark Begich (D-AK) tends to be one of the more conservative members of the Democratic Party. But while he’s been mostly supportive of President Barack Obama on the Affordable Care Act, there’s one issue one which he and the president may have a harder time finding consensus. During an appearance on CNN Thursday, the senator said that if Obama ever comes up to Alaska, he will “bang him over the head a few times” until he agrees to open up oil drilling in the ANWR region of that state.

Begich, who is up for re-election in 2014, would not say whether he would accept an offer from President Obama to come to Alaska and campaign for him. When anchor John Berman asked if Obama’s presence on the campaign trail would be “helpful” in the solidly red state, Begich deflected the question by saying, “Anyone who banks on a politician coming to the state is not working on what they need to do.”

“If the president wants to come up, that’s his decision,” Begich continued. “But you know what? If he comes up here, I’m going to take him to the arctic, show him ANWR, tell him why we need to drill in ANWR, change his mind on that if I can, bang him over the heads a few times on it. So, if he wants to come and see what I need to show him to change his position on, I’m happy to do it.”

“Seems like a dream trip for the president,” Berman joked. “Not sure this is going to happen.”

“Did he really say ‘bang him on the head?'” Zoraida Sambolin asked in disbelief. “That won’t go over very well.”

President Obama has long opposed drilling in the Arctic National Wildlife Refuge, recently rejecting a proposal that would have traded drilling rights for a fund to research cleaner automotive technology. According to Heather Zichal, deputy assistant to the president on energy and climate change, “ANWR’s off the table.”