Andrew Sullivan To ABC: If Romney Wins Florida And VA, It’s The ‘Confederacy’ 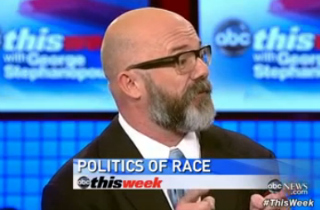 During this Sunday’s edition of ABC’s This Week, Daily Beast writer Andrew Sullivan claimed that if Republican nominee Mitt Romney wins back Florida and Virginia in the upcoming 2012 presidential election, especially due to the white vote, then the South’s electoral map will look exactly like the pro-slavery United States Confederacy during the Civil War.

This observation came in response to host George Stephanopoulos noting that the latest polls show that six out of ten white Americans intend to vote for Romney.

PBS reporter Gwen Ifill said that “we can’t ignore” the possible factor racial animus may play in deciding the election, noting that the poll indicates that, on some level, people are still willing to admit “racial bias.”

Sullivan then added: “If Virginia and Florida go back to the Republicans, it’s the Confederacy. Entirely. You put a map of the Civil War over this electoral map, you’ve got the Civil War.”

Will then posited two possible explanations for Obama’s slippage in the white vote since 2008: “A lot of white people who voted for Obama in 2008 watched him govern for four years and said, ‘Not so good. Let’s try someone else.’ The alternative, the ‘Confederacy’ hypothesis is that those people somehow, for some reason in the last four years became racist.”

“That’s not my argument at all,” replied Sullivan. “It’s the southernization of the Republican Party. [Virginia and Florida] were the only two states in 2008 that violated the Confederacy rule.”