Are Democrats Really Going to Let Trump Out of the NRA Noose? 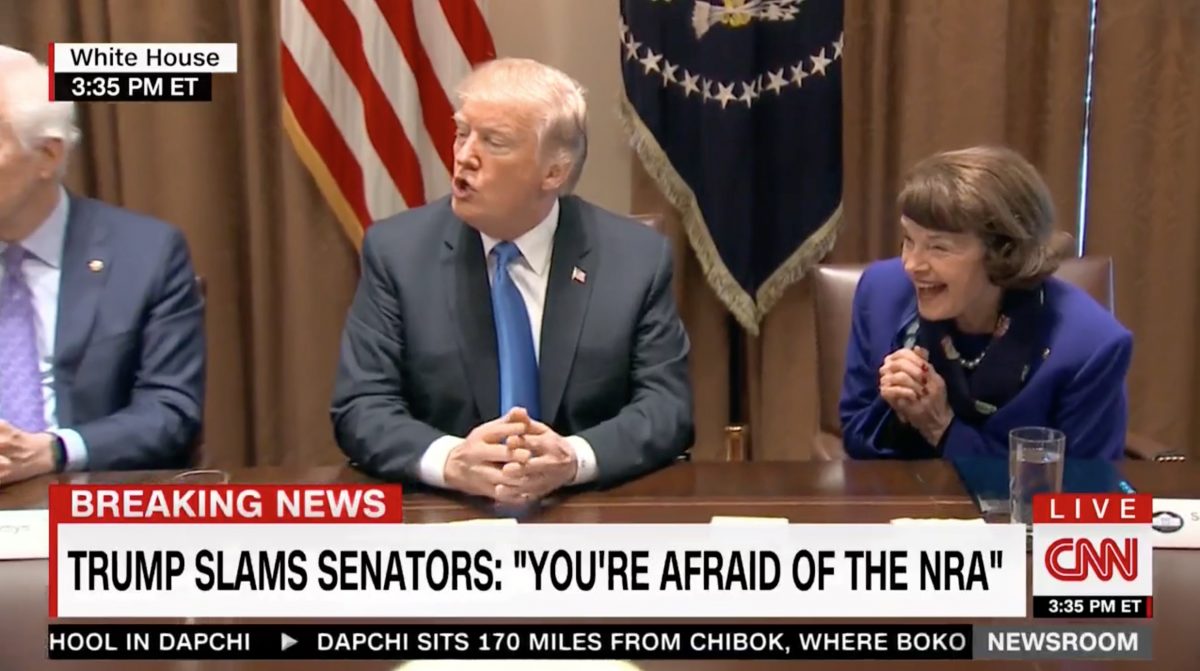 Like most real conservatives, I watched yesterday’s bizarre White House event on “school safety” in a state of both horror and amusement. Despite having detailed Trump’s emerging betrayal of the NRA and gun rights just last week, even I was stunned but some of what the president said.

He not only hypocritically stomped all over the concept of “due process” for gun owners, he specifically chided Senator Pat Toomey from Pennsylvania (to whom he may very well owe his own election, though I doubt he realizes it) for being afraid of the NRA, while boasting that he is not. He said several things (including “take the guns first”) which, if they had been—very implausibly—said by a President Obama or Hillary Clinton, would have obviously caused a storm within the formerly “conservative” media that would make what is currently forecast for the East Coast seem like a quickly-passing thunderstorm.

The climax to the insanity was when Trump had the extremely liberal Dianne Feinstein reacting with literal glee to his apparent support of her assault weapons ban, all while rejecting an NRA-approved proposal from shooting victim Steve Scalise. In short, the meeting could not possibly have gone as well for Democrats if they officially had one of their own running the show.

However, this apparent embarrassment of unexpected riches has caused a political problem for Democrats. They now need to make some choices which they don’t seem prepared for, or may not fully realize are required.

It is clear that Trump, realizing that the NRA is now politically toxic and never having seen them as anything more than a group he could dupe into doing his bidding whenever he found it in his self-interest, is trying his best to separate himself from them. This is dangerous, because Trump appears to be presuming that gun owners will let him walk all over them just like Evangelical Christians have famously done.

In my experience, that is largely a faulty assumption. Hardcore NRA members believe in the principles of the Second Amendment far more seriously that the median member of the “Religious Right” really lives out the concept that we should all abide by strong moral standards.

So while Trump is playing with fire among his insanely loyal base of support, the Democrats are curiously allowing him to get away with it, potentially to his own personal benefit. It sure seems like they are willing to let Trump extricate himself from being so closely tied to the NRA, a group with which he has been in bed since nearly the very start of his campaign.

At first glance, this seems to make political sense for the Democrats. After all, they see this life-long liberal Manhattanite coming to their side on the issue of gun control, so this seems like a real win for them.

However, the reality is that the GOP Congress, already very cautious to go against gun owners for both philosophical and political reasons, are now going to be even more hesitant because they know that Trump can’t be relied on to have their back. Unless the political calculus gets even worse for them on this issue, it seems that Trump’s lurch to the left may actually make meaningful gun reform nearly impossible to pass in this election year.

Some may correctly say that this is exactly what the Democrats really want. They would far prefer the issue to run on while being able to claim that Republicans are obstructionist on guns and must be replaced so that they can eventually work with Trump to finally get something done to “keep our children safe.”

However, by allowing Trump out of the NRA “noose,” it is possible that they may get the worst of all possible outcomes. Real reform dies, gun owners realize that it is more important than ever to vote Republican because they understand that Trump can’t be trusted on their pet issue with a Democratic Congress, and Trump escapes from a hot-button issue without having to pay any real political price.

I am hardly in the business of giving Democrats advice, and I disagree with them strongly on most things related to guns, but it sure seems like they are making a strategic error here. In my opinion, they need to remind the country just how incredibly close Trump and the NRA have been until the past week.

This would put Trump in a bind. He would then be forced to either formally betray gun owners in a way that he could not take back (currently most are still rationalizing what he said yesterday and will buy his attempts to clean up the mess today), or revert back to his prior positions in order to keep his base from finally cracking.

Either way, Democrats would get a political win. It would just be a matter of how large or lasting it would be. Currently, by not forcing Trump to pick a lane, they open up the very real possibility that — to mix a metaphor — he gets to have his cake, eat it too, while they end up with nothing.

If Trump has any political genius, it is based in his opponents not understanding how to deal with someone so clueless and unpredictable as he is. So far, it doesn’t look like Democrats have learned this lesson.