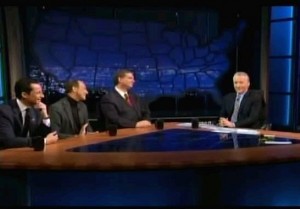 Given some of Rep. Anthony Weiner’s other TV appearances, putting him on Real Time with Bill Maher on uncensored HBO seemed like a can’t-miss idea. And if there was no talking over one another like, say, here, there were plenty of cracks about Sarah Palin, Glenn Beck, Glenn Beck’s audience…and Clarence Thomas‘ wife.

Maher opined that perhaps the influence of Palin and Beck had peaked, that “the fever has broken on crazy” in America. Weiner agreed, while also taking a bizarre crack at Beck’s audience, first saying he has “less than 300,000 viewers” (not according to this), and then said that equated to about “150 shoes” among the lot. The American Spectator’s John Fund also agreed that the intensity of Beck’s popularity might have waned, though he figured the results of November’s elections – and the belief President Obama was moving to the political center – had much to do with it (and he corrected Weiner on the size of Beck’s audience).

Then, talk turned to Supreme Court justice Clarence Thomas and his wife, who works for the Heritage Foundation, a conservative think tank. Recently, news came out that Thomas “amended 13 years’ worth of disclosure reports,” which previously omitted the details of his wife’s work with the Heritage Foundation. Maher wondered, “Should he really be on the Supreme Court if he can’t even check the box?” Weiner thought Thomas should “recuse himself from any decision about the health care plan,” while Fund argued for judging Thomas and his wife separately. Weiner wasn’t hearing it, calling Thomas’ wife “a walking conflict of interest.”

Astrophysicist Neil deGrasse Tyson, also on the panel, stayed above the fray, saying there were “separable variables” at play; i.e. one must look at whether they object to Thomas’ wife’s work itself separately from whether they think it constitutes a conflict of interest for Thomas with the court. Leave it to the least political person there to express the most reasonable political views. Video of the clip, via HBO, below.