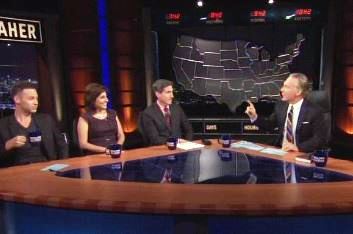 Bill Maher’s Friday night panel tackled a wide variety of issues on the War on Terror, from the coming surveillance state to John McCain‘s trip to Syria.

“Obama made a giant speech—I thought it was his bravest speech ever—about the War on Terror,” Maher said. “He basically said, ‘All wars must end.’ This has been fun. It’s cost us over a trillion dollars. We’ve shit our pants every day for ten years. But let’s try to grow up and not be on a war footing forever.”

“This was Obama’s message,” said James Poulos, a HuffPost Live producer. “He said look, the Bush War on Terror is over, it was a lot like Bush: it was arrogant, heavy-handed in your face. My war on terror has just begun, it’s going to be like me, too: elite, aloof, hypocritical to the bone. And this war could go on forever. We don’t know. Maybe the next President will take it in a whole new directrion. Obama thinks that he can control what the next President will do, but it’s not going to be that easy.”

“I don’t think that’s exactly right,” said Neera Tanden, President of the Center for American Progress. “He’s saying you can’t use the legal structure, the Authorization for Use of Military Force that was created after 9/11—he actually wants to restrict that. He’s not actually saying ‘I want my own war.'”

“I feel like it was a speech only a second-term President could make,” Maher said. “To say, look bad shit is going to happen, no President can stop that. To me this was a lot braver than gay marriage speech, because gay people are not going to fly a plane into a building.”

Maher turned to the recent terror attack in London, likening the incident to the Boston Marathon bombing; in both cases, the perpetrators turned out to be self-radicalized individuals without connection to a greater terrorist network.

“If you really wanted to go after the War on Terror, in this day and age, you’d go after the internet,” Maher said.

“I think the lesson here is no matter how big the surveillance state gets, no matter how big the Military Industrial Complex gets, it always seems to be one step behind what’s going on in Terror World,” Poulos said. “We can grow this thing as large as want, we can spend as much money on it as we want…If you double down on trying to beat terror, what you’re going to find is you can’t beat a thing, you can only beat people.”

“But if their best friends didn’t know what was going on, in the mind of the London guy and the Boston bombers, how is Homeland Security going to know?” Maher asked.

“This is not a good thing,” Poulos said, “[but] this is what’s going on right now. Were building these things in the desert, to compile all the information that there is on Americans, put it in a big box, bury in the desert, guard it. And that’s the wrong way to go, but I fear that’s the way we’re going to try to go, to get out ahead.”

“We shouldn’t conflate al-Qaida with these particular incidents,” Tanden said. “We have actually had some progress in the war against al-Qaida. They’re not the same a they used to be.”

So is John McCain. “This is a clusterfuck like you cannot believe,” Maher said, “and McCain wants in! What sane person wants to get in this war? And did this man ever see a war that he did not want to join?”

“He clearly wants to be the Dennis Rodman of Syria,” playwright Paul Rudnick said.

“Dennis Rodman was looking for peace,” Maher said. “He doesn’t know what Syria or Korea is. John McCain definitely knows what’s going on in Syria.”

“We gotta ask: ‘Where’s the administration on this?'” Poulos said. “We’ve got Ambassador Dennis Rodman in North Korea, Ambassador John McCain in Syria, we’ve got Steven Segal sitting down with Vladimir Putin trying to resolve the Chechen dispute. Who’s minding the store here?”

“How is the administration supposed to handle this?” Maher asked. “Are they supposed to drone Steven Seagal?”

“Surely the White House can sit down with some of these guys and say, ‘Hey, I know this means a lot to you, but maybe you can not do it now?'”

“You think that would work with John McCain,” Maher said. “If Obama asked him nicely?”

“Maybe he could send Joe Lieberman to ask,” Poulos said.