Maher To Panel: GOP Didn’t Suddenly Go ‘Off The Rails,’ Always Been Weird Mix Of ‘Jesus Freaks’ And ‘Plutocrats’ 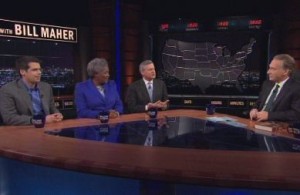 Bill Maher tonight looked at the recent attempts to moderate the GOP and draw the party away from strongly conservative candidates like Todd Akin and Richard Mourdock. However, Maher couldn’t help but point out that in spite of conventional wisdom, that the Republican party only just recently went “off the rails,” he said the party has always been an “uneasy marriage” between “Jesus freaks” and “plutocrats.”

Maher highlighted a new group set up by Karl Rove trying to help conservatives who can actually win elections and keeping some of the more wild “batshit” out of general elections. Jon Meacham noted it as a stunning moment that “Karl Rove has become the moderate establishment.”

Donna Brazile said that there are still Republicans talking in such outlandish terms about social issues, pointing out that on the day of his State of the Union response, Marco Rubio voted against the Violence Against Women Act. Maher disputed the idea that the Republican party only recently went “off the rails” because of social issues, but for decades the party has been an “uneasy marriage” between “Jesus freaks’ and “plutocrats.”

The Daily Caller’s Jamie Weinstein argued that Obama has been consistently demonizing millionaires and billionaires, to which Meacham challenged his assertion. Bill Maher brought up Obama coming out for a higher minimum wage, saying that corporations should stop complaining about having to raise prices and just do it, because no one’s going to care if their arugula salad is a dollar or two more expensive.

Meacham went back to Weinstein’s point and told him that it is “ahistorical and irrational” to think that Obama is a socialist or trying to demonize big business.