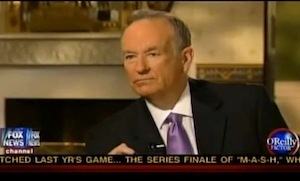 In the hours that preceded Sunday night’s Super Bowl, President Obama sat down for a live (and lively) interview with Fox News host Bill O’Reilly. Last night’s O’Reilly Factor was, fittingly, almost entirely dedicated to dissection of the back-and-forth, or in O’Reilly’s terms, whether the interview was “pinheaded or patriotic?” The Fox News anchor took on criticism over his asking Obama if he was “disturbed that some people hate (him).”

After playing the clip in the opening “Talking Points” segment, O’Reilly took exception to Rep. Nancy Pelosi‘s critique of this specific part of the interview, saying “to hear this used in the presence of the President of the United States, I think we all have to recognize that while we may disagree with people and while we may think they are wrong,” later adding “we shouldn’t think that they are bad and we shouldn’t ever use the word hate in context of people.” He then followed by playing an edited clip of Morning Joe‘s Mika Brzezinski, who openly wondered “if that would have ever been asked about George W. Bush?”

Aha! That’s where O’Reilly was ready to pounce at the seeming double standard of the left, as he quickly wondered aloud “if anyone would have dared to ask President Bush that kind of question?” Cut to O’Reilly recently asking the former President Bush: “the people in the press hated you, a lot of them. Why?” A smiling and self-satisfied O’Reilly was clearly pleased by what he surely saw as a clean debate victory.

Only, he shouldn’t be.

There is clearly a very big difference between telling a sitting U.S. president that people hate him, and asking a former president why some in the press hated him. To draw some sort of reasonable comparison is an unfair and false equivalency. Further, suggesting to a sitting president that he his hated by “the people” is poor form, especially for a self-described “traditionalist” like O’Reilly. To be fair, his questioning did not seem specifically designed to undermine Obama in any way. It was simply poor etiquette.

The entirety of the Obama and O’Reilly interview (an additional ten minutes of which aired last night) was extremely compelling and a win-win-win for everyone involved: Obama was able to reasonably demonstrate that he’s not a rabid socialist to some hard core fans of “The Factor”; O’Reilly deftly demonstrated an effective balance of tough questions and a (mostly) respectful and convivial tone; and the viewers were able to watch two sides of an ideological divide communicate, and find at least some common ground.

We’ve long believed that the smartest thing that Obama could ever do was to engage with O’Reilly (in a post written over a year ago that’s appropriately titled “Why the Smartest Thing President Obama Can Do is Go on The Factor.”

Lets hope that, in the coming 2012 campaign season, Obama and O’Reilly have more discussions like this. For the good of the country.