Bill O’Reilly: People Were ‘High-Fiving Me Everywhere’ After The View Controversy 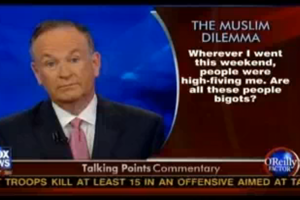 Bill O’Reilly doesn’t care what Whoopi Goldberg or Joy Behar think of him, as long as the folks have got his back. After the ladies of The View continued to talk about the issue of whether saying Muslims– and not Muslim extremists– attacked the United States on 9/11, O’Reilly rebutted them in his “Talking Points Memo,” taking on Goldberg, Behar, Barbara Walters, and even Rosie O’Donnell.

“In case you came back from Easter Island…” O’Reilly quipped before retelling the story of his fight on The View. The topic of muslim extremism against America has suddenly become a much touchier topic, it seems, than it had been in a long time, beginning with the proposed Islamic cultural center in the same neighborhood as Ground Zero. “It has entered the fabric of America,” he noted, and laid out the arguments of the View girls. In particular, there were two arguments he seemed vehemently to oppose: Goldberg’s that saying muslims attacked 9/11 would be to implicate Muhammad Ali and Kareem Abdul Jabbar, and O’Donnell’s comment that O’Reilly does nothing but “incite hatred.”

“If Whoopi Goldberg doesn’t think there’s a Muslim problem, she should ask Barack Obama,” he retorted, while going out of his way to find a vintage Rosie O’Donnell View clip saying radical Christianity is as dangerous as radical Islam to point out he may not be alone in what she accuses him of doing. “I have had enough of the political correct nonsense, and I condemn the far left fanatics who label those who disagree with them ‘bigots,'” he declared, while backing up his argument in part with the fact that people he ran into this weekend agreed with him. “Wherever I went this weekend, people were high-fiving me,” he said. “Are all these people bigots? Do they all hate Kareem Abdul Jabbar?”

The opening segment from tonight’s Factor via Fox News below: