Bloomberg: Obama ‘Has Spent The Last Three Years Trying To Avoid The Issue’ Of Gun Control 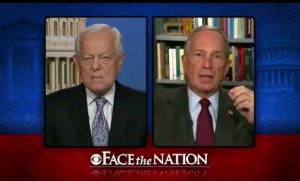 New York mayor Michael Bloomberg continued to criticize the president and his Republican rival for not stepping up on gun control today on Face the Nation. He told Bob Schieffer that even with the shooting in Colorado two days ago and both Romney and Obama being vocal on gun control in the past, they are now shirking the issue entirely. Bloomberg said that the president in particular has “spent the last three years trying to avoid the issue.”

Schieffer asked Bloomberg what else besides “sympathy” he would like to hear from Obama and Romney. Bloomberg said that it’s not enough for the two men to simply comfort people, they need to actually do something, and tell people what specifically they would do about guns. He noted that Romney got an assault weapons ban passed in Massachusetts while he was the governor, while Obama had pledged early on in his administration that he would try to reinstate the federal ban.

Bloomberg criticized both candidates for dropping the ball on gun control in an election year in favor of more sensationalized politics.

“The governor has apparently changed his views and the president has spent the last three years trying to avoid the issue, or if he’s facing it, I don’t know anybody who’s seen him face it, and it’s time for both of them to be called – held accountable.”

Schieffer asked Bloomberg if the powerful lobbying influence of the NRA has anything to do with the lack of action in Washington over gun control. Bloomberg said the NRA has been very vocal and effective in speaking out against any and all gun laws for decades.

Bloomberg also brought up ads for guns and ammunition that people see browsing the internet, including armor-piercing bullets. He deadpanned, “The last time I saw a deer wearing a bullet-proof vest was a long time ago.”