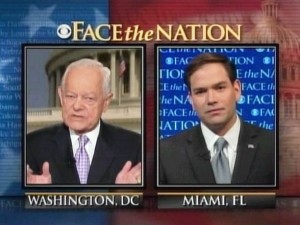 Sen. Marco Rubio got into a testy exchange with CBS’ Bob Schieffer on this morning’s Face the Nation— one reflective of the national frustration with the current budget talks. As Sen. Rubio argued that President Obama had put off the talks to the last minute to make Republicans look obstinate, Schieffer interrupted to defend the President’s credentials, suggesting that the Bush administration had at least as much of the blame to shoulder as President Bush.

“I came to Washington in January,” Sen. Rubio noted, and argued that he already knew at the time the sort of problem that the debt would cause. He accused President Obama of proposing “a budget that was so ludicrous that not even Democrats in the Senate voted for it,” and then became “completely disengaged with the matter.” He concluded he believed “there was a strategy to leave it for the last possible moment so that there would be a ‘take-it-or-leave-it’ scenario.”

At this, Schieffer jumped to add that Sen. Rubio would “have to concede that maybe the previous administration had a little something to do with the bad economy the President inherited?” And, as it turns out, Sen. Rubio didn’t seem to agree that he had to concede that a budget battle in 2011 was somehow President Bush’s fault. He didn’t outwardly swat the out-of-character talking point down, instead simply replying, “when does it start getting better, Bob?” Schieffer continued to press, reminding Sen. Rubio that “the Treasury Secretary has warned for months” of the problem, and yet Sen. Rubio keeps “saying that this is a surprise to everybody,” and that Republicans were not willing to make concessions.

Sen. Rubio responded that he had yet to see “a piece of paper with the president’s name on it that is his plan,” so even if he was aware of the problem, he hadn’t done anything to fix it. As for concessions, Sen. Rubio reminded Schieffer that as the representative of a state with a high population of elder constituents, he was invested in saving Medicare and Social Security.

The most perplexing part of the exchange was Schieffer bringing up the Bush administration during the talks. Sen. Rubio was, of course, not around then to shoulder any blame, but neither was President Obama. Nor was this current problem present at all– sure, the Bush Administration increased defense spending astronomically, but they were also ushered into office by the worst terror attack in the nation’s history. A terror attack, it is worth noting, that happened a decade ago, and, with Osama bin Laden dead, has about as little place in the current talk about national security as the administration to which the responsibility of cleaning up the mess fell.

The debate via CBS below: