Charles Krauthammer To Bill O’Reilly: Newt Gingrich Is ‘A Victim Of His Own Creative Intelligence’ 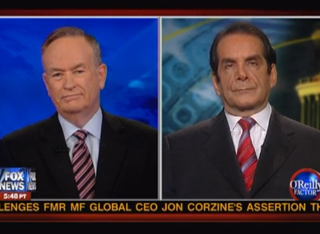 As former House Speaker Newt Gingrich continues to gain a lead in the polls, much of the talk surrounding his run is the apparent opposition to his nomination from the Republican establishment. On tonight’s O’Reilly Factor, host Bill O’Reilly asked Charles Krauthammer precisely this, and before getting a serious answer on Gingrich’s Achilles’ heel, received a bit of a ribbing on the definition of “establishment.”

RELATED: Charles Krauthammer: In Order To Win, GOP Needs ‘A Candidate Who Is As Generic As Possible’

“Are you a member of the establishment?” Krauthammer asked, to which O’Reilly replied in the negative, as he was not one of those “people who wield fundraising power and are lifelong members of the Republican Party.” “Oh, that’s the reason you haven’t been at the monthly meetings we hold at the Masonic temple,” Krauthammer replied wryly, adding that “you’ve got to bring a live lamb and Karl Rove brings the incense.”

Getting down to business, Krauthammer then noted that there was, indeed, a fear that Gingrich was “too erratic or mercurial… a victim of his own creative intelligence.” “These people wonder,” he continued, “if he’ll wake up one morning the way he did in the past with a mandate or global warming… and surprise people by being unconservative.” The other concern, he argued, was that Gingrich was unelectable– so much so that “he would hurt the House and the Senate even.” Krauthammer argued that his political (not personal) baggage would not be overlooked in a general election.