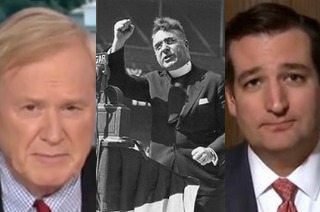 After playing a portion of clips of Cruz speaking to conservative audiences, Matthews noted that the junior senator from Texas has said even more inflammatory things off camera.

“In 2010, when he said that [Barack] Obama would make a perfect president of Harvard Law School because, quote, ‘There were fewer declared Republicans in the faculty when we were there than communists,’” Matthews reported. “I’m assuming, of course, that the communists would vote for the president.”

“This guy goes pretty far, but I think he fits in the tradition of Father Coughlin, and [Joe] McCarthy, and of course, maybe to a lesser extent, Pat Buchanan, and [Bill] O’Reilly,” Matthews said.

He noted that all of the people he listed “look a lot alike” as well, and each have “black Irish” features. “They don’t smile much,” Matthews added.

Father Coughlin broadcast an anti-Semitic pre-World War II radio program in which he regularly attacked President Franklin Roosevelt and sympathized with the causes of Adolf Hitler and Benito Mussolini. During a speech in the Bronx in 1938, Coughlin shocked the nation by giving a Nazi salute and exclaiming, “When we get through with the Jews in America, they’ll think the treatment they received in Germany was nothing.”