Chris Wallace: ‘I Would Be Surprised’ If Obama Attacks Syria Without Congressional Support
video

Chris Wallace: ‘I Would Be Surprised’ If Obama Attacks Syria Without Congressional Support 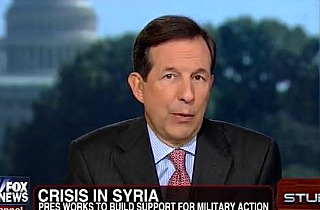 On Friday, Fox News Channel anchor Chris Wallace told anchor Shepard Smith that he believes President Barack Obama is unlikely to move forward with a strike on Syria if he cannot secure congressional authorization for the use of force. Based on comments made by Deputy National Security Advisor Tony Blinken, Wallace said that it appears that the White House is prepared to defer to Congress on whether to move forward with a strike.

On Friday, Blinken said on National Public Radio that, while Obama believes he has the authority to act without the consent of Congress, it is not his “desire nor his intention” to move forward without authorization.

“Right now, the support in Congress does not exist,” Smith said.

“They say a gaffe in Washington is when you inadvertently tell the truth,” Wallace opined.

He said he spoke with a White House official who said that Blinken’s quote revealed more of the thinking inside the White House than they had wished. Wallace added that Obama appeared to be indicating on Friday in Moscow that he is not going to attack Syria against the will of Congress.

“He seemed to be leading to the idea that of the country says, ‘no, I’m not going against them,’” Wallace said. “So, I would be surprised if he were to act if congress says no.”