Chuck Todd: Obama Got Congress ‘To Act Like A Congregation’ When He Demanded A Vote On Gun Control
video

Chuck Todd: Obama Got Congress ‘To Act Like A Congregation’ When He Demanded A Vote On Gun Control 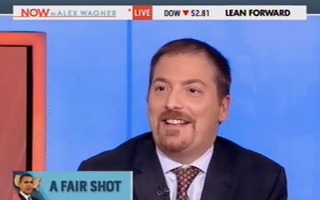 Chuck Todd, NBC News’ Chief White House Correspondent, told the panel guests on MSNBC’s Now with Alex Wagner that President Barack Obama’s State of the Union address ran the risk of being forgettable until the end of the speech. Then, building to a crescendo while insisting that Congress vote on new gun laws, Todd said that Obama turned Congress into a “congregation.”

RELATED: The Most Popular Part Of Obama’s State Of The Union Address Was, Well, Not Very Popular At All

“It would have been seen as a run-of-the-mill State of the Union,” Todd began, “It would not be getting a lot of Beltway attention, a lot of opinion elite attention, had it not been for the last 10 minutes of the speech.”

“What was amazing about it, in this respect, he got members of Congress to act like a congregation,” Todd continued. “They got caught up in the moment.”

Todd said he observed Sen. Jeff Sessions (R-AL) swept away with emotion when the president singled out a 102-year-old woman who had difficulty casting her vote in the 2012 election.

“It sort of reminded you – and I think why some people get frustrated with President Obama – he has some unifying ability,” Todd observed. “This town wants to be unified in some things, and that last ten minutes was a good moment for him.”

The panel guests concluded by noting that the president’s demand for a vote on gun control was not asking for much from Congress, and it should be a moment that resonates with the public.