CNN’s Borger: Best Way to Defeat a Woman Is to Portray Her as ‘Emotional Wreck’
video

CNN’s Borger: Best Way to Defeat a Woman Is to Portray Her as ‘Emotional Wreck’ 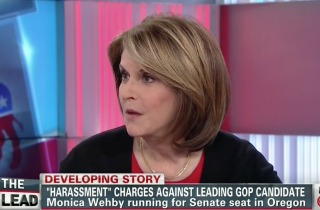 CNN’s Chief Political Analyst Gloria Borger argued on Tuesday that the “war on women” is actually tenable politics. At least, it is when Democrats are that war’s prosecutors.

In a discussion regarding the uncovering of Oregon Republican U.S. Senate candidate Monica Wehby’s police records pertaining to past domestic disputes – records which were reportedly dug up by the state’s Democratic Party — Borger said that the Beaver State’s Democrats were merely playing smart politics. The surest way to make a female candidate toxic to persuadable voters, she said, is to portray that candidate as a basket case.

RELATED: Dems’ Smearing of Female GOPer Another Blow to the ‘War on Women’

“What do you do when you don’t want a woman winning a Senate seat?” Borger said, channeling the frustration of a hypothetical imperiled incumbent. “You portray her as some kind of an emotional wreck, okay, who can’t possibly be trusted with the high office.”

“While it might not hurt her as much in the primary, it will certainly come back in the general election,” she added.

CNN’s The Lead host Jake Tapper and reporter Dana Bash agreed that a male candidate would also see their police records uncovered by opposing campaigns and released to the press, particularly if those records related to a domestic dispute. But there is, to borrow a phrase, “gendered” distinction which neither Bash nor Tapper made.

This appears to be one of those occasions which backfired on the candidate attempting to paint his opponent as an “emotional wreck.” As The Washington Post’s Nia-Malika Henderson reported on Tuesday, in spite of the fact that this story dominated both the national and local headlines, Sen. Jeff Merkley (D-OR) did not even bother to mention the newly uncovered personal issues his likely GOP opponent struggled with in his daily memo to reporters.

The kitchen sink strategy being employed against Wehby has the effect of actually augmenting the perception of her as a strong candidate. While the revelations impugning her character may prove potent in the general election, today they impart the notion that Wehby is the most electable candidate – the candidate that the incumbent Democrats fears the most.

“They want to win,” Borger said, as an aside, in closing. Indeed, they do — even dirty, if need be.