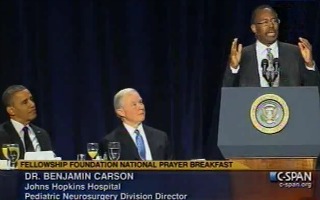 After attacking politically correct speech as “dangerous” and a “horrible thing,” Carson turned to education. He discussed the scholarship program he manages which is directed at troubled youth. Carson said that education was the key to avoiding the fate suffered by ancient Rome. “Moral decay, fiscal irresponsibly – they destroyed themselves,” Carson said.

“Our deficit is a big problem,” Carson continued. “Think about it — our national debt — $16 and a half trillion dollars.”

“What about our taxation system? So complex. There is no one who can possibly comply with every tax issue,” he said. “If I wanted to get you, I can get you on a tax issue. That does not make any sense. What we need to do is come up with something that is simple.”

“When I pick up my bible, you know what I see? I see the fairest individual in the universe, God, giving us a system. It’s called tithe,” Carson offered. He said God expects a flat tithe which is perfectly proportional at 10 percent – applied to government, that would be a flat tax.

“Well some people say, ‘well that’s not fair,’ because it doesn’t hurt the guy who made 10 billion dollars,” Carson said, anticipating the counterargument. “Where does it say you have to hurt the guy? He just put $1 billion in the pot. We don’t hurt him. It’s that kind of thinking that has resulted in 602 banks in the Cayman Islands.”

Carson pivoted to health care reform, where he established the necessity of care but also expressed concern about the inefficiency of the present U.S. insurance system.

“What can we do? Here’s my solution; when a person is born, give them a birth certificate, an electronic medical record, and a health savings account.” Carson said. “Too which, money can be contributed pre-tax to the time you’re born to the time you die. When you die, you can pass it on to your family members so that when you’re 85 years old and you have six diseases, you’re not trying to spend up everything. You’re happy to send it on and there’s nobody talking about death panels.”

Watch Carson’s address below via C-SPAN: