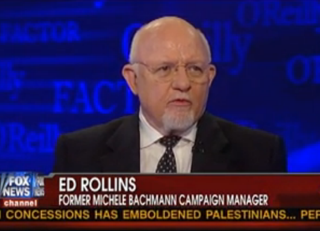 After defining last week’s news cycle with her attacks on the HPV Vaccine, Rep. Michele Bachmann has plenty at stake going into Thursday’s Fox News/Google debate. On The O’Reilly Factor tonight, her former campaign manager Ed Rollins didn’t mind her performance last week so much– though admitting that it hurt her– and promised that Rep. Bachmann could win the first caucus, “and if she wins Iowa, she’s still in this race.”

O’Reilly opened the discussion by noting that Rep. Bachmann’s poll numbers had dwindled significantly– now, according to Gallup, putting her behind Rep. Ron Paul in fourth place. This Rollins attributed almost directly to Rick Perry, arguing that, even though Rep. Bachmann was the “best candidate in this field,” “when you throw Texas into a national poll, that’s 10% of the population” (he used this argument exclusively to explain Perry and not Rep. Paul, however. He also did note that he had little to no faith in polls, citing the fact that this time in 2007 that showed “Giuliani leading in every single poll,” which clearly proved to be a red herring.

In any case, after being asked a few times about her debate performance, which O’Reilly seemed to find lackluster, Rollins agreed that it “hurts her at this point in time, but she’ll be back debating.” Rollins emphasized that “our strategy was always for her to win Iowa” and that he believed she could do it, as she won the Ames straw poll there– “if she wins Iowa, she’s still in the race.”