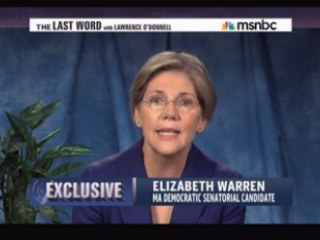 O’Donnell kicked things off by pointing out a recent attack ad against Warren that attempted to cast a negative light on her role as an Ivy League professor. “You know, all I can say is ‘yeah, I have a job at Harvard,'” she responded. “But I ‘wasn’t’ born at Harvard.”

As for the ad’s attempts at painting Warren as a “coddler” of billionaires and protector of Wall Street, she says this is merely a “kitchen sink strategy” in which the opposition throws anything and everything at her to try and see what sticks.

“Let’s keep in mind what was going on just a little over three years ago,” she advised. “Karl Rove was part of the inner circle while George W. Bush is telling Congress and a nation, ‘We gotta bail out the big financial institutions,’ his Secretary of the Treasury is handing out money to the largest financial institutions, no strings attached. I go down to Washington and I’m calling ’em out for it. I’m calling ’em out on executive bonuses, I’m calling ’em out on the fact that they’re giving this money away, no strings attached. And I get attacked for it. Ok. Then we roll forward three years. Now Karl Rove takes money from Wall Street in order to attack Elizabeth Warren for being cozy with Wall Street?”

The two then wondered whether incumbent Massachusetts Senator Scott Brown voted in favor of Rich Cordray to try and gain an edge on Warren.